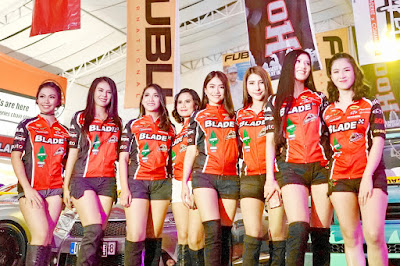 Now on its second year, Bandang Blade is a two-day music festival and car show geared towards music and automotive enthusiasts. Held at the grounds of the Metrowalk and Metrotent in Pasig City, this year’s staging of the music and car show extravaganza attracted fans from all over Metro Manila and the nearby provinces.

Of course, the event visitors were able to shop for car accessories and merchandise at discounted prices.

The highlight of the two-day music event was the concert held at the Metrotent. This year’s Bandang Blade featured rapper Shanti Dope, DJ Kim Lee, and Parokya ni Edgar.

Bandang Blade was also the launch pad for the upcoming movie “Dito lang Ako”, a film produced by Blade Autocenter to be shown later this year. Lead actors Jon Lucas, Michelle Vito, Akihiro Blanco, Roadfill of Moymoy Palaboy, and movie icons Freddie Webb and Boots Anson-Roa graced the event to the delight of the crowd.

“We are so blessed this year given the sheer number of people who attended the event. We promise to keep on improving, become better every year,” adds Robertson Sy Tan, Founder and CEO of Blade Autocenter.
at 7:30 AM

Email ThisBlogThis!Share to TwitterShare to FacebookShare to Pinterest
Filed Under: Events, News