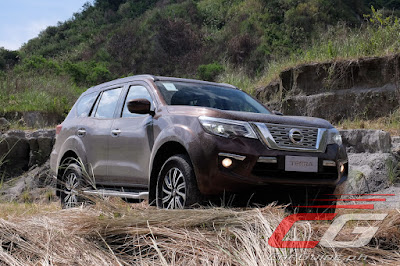 “Admittedly, we’re a bit late to the game,” said Vincent Wijnen, Nissan’s Head for Marketing and Sales for Asia & Oceania. “But we made sure to get it right. We wanted to make sure that the all-new Nissan Terra is a vehicle that fits the requirements of our Asian customers; the market for which the Terra is specifically made for.”

Mr Wijnen’s statement bring forth some pretty high expectations for Nissan’s first-ever 7-seater Pickup-based Passenger Vehicle or PPV; it’s also a statement that proves to have plenty of bite the moment it was taken on its first-ever outing on Philippine roads. Late to the game the Nissan Terra is, but it’s also managed to raise the bar. This is now the best one in its class, bar none.

Honestly, it doesn’t tug the heartstrings when you look at it. Yes, it’s clean, crisp, modern, and premium-looking even; but it’s not strikingly beautiful. There are lovely cues here and there from the corporate-look headlights and grilles, but not much else. There’s nary a line out of place, but it’s not exactly a standout either. Yet, it’s a design that’ll undoubtedly age gracefully; one that’ll look elegant years from now compared to the sometimes comically exaggerated look of some of its competitors (well, maybe except for that bee-sting type pole antenna).

Dig deeper into the details though and the Terra reveals some interesting design details. For starters, its dimensions aren’t extraordinary, but Nissan’s managed to stretch the distance between the front and rear axles—enough for a 2,850-millimeter wheelbase which puts it best-in-class. The same class-leading figure is found with its approach (32.3 degrees) and departure (26.6 degrees) angles. Its 225-millimeter ground clearance is quite generous too.

Nissan’s work to optimize the Terra dimensionally also translates to best-in-class legroom across all three rows. It’s the same thing when it comes to its luggage space whether the third row is up (it can fit a 9-inch golf bag), the third-row is stowed, or both the second and third row is stowed. The third-row is a knees-up affair but the good headroom and adjustable seatback angle allows for better comfort than any other offering in this segment.

Again, beyond the numbers, the Terra considers usability as well. Not only does the loading area fold flat completely, but the second row flips up with a single-action lever. The same action can be done with a pull switch on the center console making the use of the third row infinitely more convenient. And for those wondering, the Terra manages to keep Nissan’s reputation for having a well-thought of air conditioning system. Not only does it have ceiling vents across all three rows, but the second row also has vents located in the center console.

Like its conservative exterior, the Terra’s interior looks somewhat plain. It’s also clearly derivative of the Navara pickup truck down to the use of hard plastics across most of the cabin’s surface. That said, fit and finish is top notch and all the panel gaps are consistent throughout, down to the factory-installed Blaupunkt touchscreen audio system which supports Apple CarPlay on the top-line variant. There’s also an overhead monitor that mirrors whatever’s displayed on the head unit.

The Terra is also pretty solid when it comes to driver comfort and ergonomics. Though the steering wheel only adjusts for tilt, the power adjustment for the driver makes finding a comfy driving position quite easy. The dark brown leather seats are also wide and supportive, perfect for long hours spent behind the wheel. The control scheme is typical Nissan—with nice, tactile switchgear, clearly marketed controls, and a highly legible gauge cluster. Having said that, Nissan missed the opportunity to install grab handles for the driver. This makes ingress and egress more difficult.

Shared with the Navara, the Terra is powered by Nissan’s tried-and-tested YD25 DDTi engine making 190 horsepower and 450 Nm of torque. Mated to a 7-speed automatic, it makes for a great combination resulting in a smooth, fuss-free drive. The entire nature of the powertrain is relaxed, offering good tractability without having to rev the engine too much. Like any other diesel engine, it makes its presence felt at higher speeds, but compared to its competitors, the interior is far more hushed. Thanks to extensive dash insulation, thicker floor carpeting, and the use of acoustic glass, carrying a normal conversation is actually possible between the first two rows. The wind, road, and tire noise are also quite controlled at high speed. The gearbox itself uses a very low first gear (good for towing, off-road traction), but spaces itself out nicely with 100 km/h arriving at a hairline below 2,000 rpm.

Just as the Navara’s made a name for itself for being the best-riding pickup truck that you can buy, the Terra also does the same for the mid-sized SUV category. It still won’t match a unibody crossover in terms of ride and handling, but for the most part, it delivers. Small niggles, especially over small undulations still make their way into the cabin, albeit in a hushed way; but larger ones are quelled altogether. Easily, it’s the best riding SUV in its class, especially on rougher terrain. The secret here is the Terra’s ability to use its frame as a shock absorber and together with cabin mount bushings, it results in a double vibration absorption effect.

The steering itself is still hydraulically assisted which makes for a weighty effort to make a full turn, but at least its noticeably lighter than its two biggest competitors. Likewise, it’s much more planted and secure at any speed, offering none of the floaty feel commonly associated with body-on-frame offerings. It’s also quite stable at tackling sudden lane change maneuvers. The brakes, although offering a dated ventilated disc/drum setup remains well-balanced and attuned to the Terra’s character.

On the trails, the Terra trounces another mainstream car brand that’s more commonly associated with off-roading hijinks. Not only do the class-leading approach and departure angles help, but the amount of equipment fitted on the 4x4 ensures surefootedness whatever the terrain. Although it still doesn’t employ any sort of fancy single-button terrain-based system yet, there’s good amount of mechanical grip available even when trailing Pinatubo’s Delta 5 on stock highway-biased tires on stock (33 PSI) tire pressure. The secret is the combination of its traction control system which mitigates unwanted spin at the front wheels and the rear locking differential which allows torque to be transferred to both rear wheels whatever the situation. Furthermore, it has hill descent and hill start assist.

Finally, in the safety aspect, it seems Nissan is pulling out all the stops to make sure the Terra becomes associated with class-leading safety. Not only does it have 6 airbags and ABS with EBD across the entire range, the higher variants also come with Nissan Intelligent Mobility features such as a 360-degree Around View Monitor with Moving Object Detection, blind spot indicators, and what could be the niftiest feature: Intelligent Rear View Mirror. Not only does it act as the display for the 360-degree camera, but it also allows drivers to switch from a conventional rear mirror to a camera-mounted display with a simple toggle. This gives unparalleled rear visibility, even when the interior is fully loaded to the brim or when being driven in poor weather. Honestly, there is one surprising aspect: the lack of 3-point seatbelts for all occupants. As it stands, the second row’s middle occupant will have to learn to live with a 2-point lap belt.

At this point, it’s fair to say that the Nissan Terra is far from being perfect. Yet, it manages to serve up a masterful performance that ups the notch compared to everything else in its segment. The Terra’s main draw is its top-of-the-class mechanicals, excellent ride, well-thought-of packaging, and of course, its excellent pricing. It may be late to the SUV party, but it’s clearly now the center of everyone’s attention.