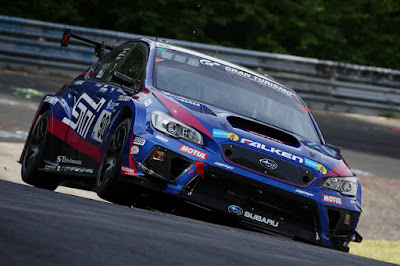 Although the team started the race from pole position in the SP3T class, they experienced mechanical trouble in the early stage of the race. However, the team of mechanics, chosen from Subaru dealers across Japan, solved the problem and the car was able to return to the race.

Since then, the four drivers, Carlo van Dam (Netherlands), Tim Schrick (Germany), Hideki Yamauchi (Japan), and Takuto Iguchi (Japan), closed the gap with the lead and regained the top position around
10th hour from the start of the race.

As the weather turned worse, the WRX STI’s Symmetrical AWD system enabled it to pass other cars a class or two higher.

Just an hour before the finish, the car once again entered into engine trouble, but it returned and crossed the line first in the SP3T class and 62nd overall.
at 11:50 AM