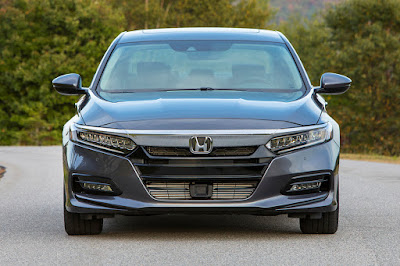 The Philippine automotive industry is seeking to rebound after the government’s implementation of TRAIN caused a derailment to growth in 2018. Collectively, carmakers are predicting a 10 to 15 percent rise in sales. While the growth will still be fueled mostly by attractive financing schemes, the bullish car industry is looking forward to new products to help spur this rebound.

Discounting models which have already been previously announced for 2019 such as the Alfa Romeo Stelvio, Hyundai Accent, Mitsubishi Strada, Nissan 370Z, Subaru Forester, and Suzuki Jimny, here are 12 new cars which will (probably) arrive in the next 365 days. 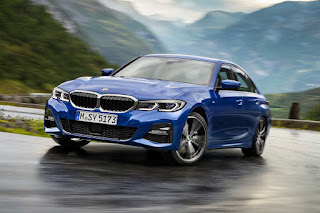 The most important product in BMW’s passenger car line-up globally, the time is ripe for the all-new 7th generation 3 Series to arrive in the country. The “G20” aims to set the bar once more in driving dynamics, quality, and innovation. Underpinned by an all-new platform, it’s up to 55 kilograms lighter than its predecessor while upping the sporty nature the 3 Series has been known for. The new 3 Series also introduces the latest version of iDrive—BMW Operating System 7.0. Expect the Philippine model to come in both 318d and 320d flavors, the latter boasting 190 horsepower and 400 Nm of torque. 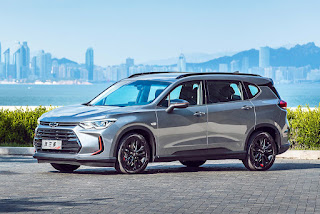 With the Sail already sourced from China, there’s no reason why Chevrolet Philippines can’t bring in the all-new Orlando. With the demise of the Captiva, Chevrolet needs to fill that market gap with a car-based 7-seater and the SUV-fied Orlando fits the bill. It’s certainly more imposing now thanks to Chevrolet’s new design language while performance should satisfy even the most discerning petrol heads with a 163-horsepower turbocharged engine. 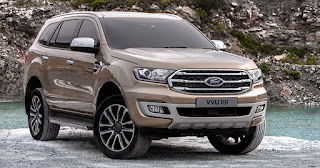 Shown on Instagram (and then quickly removed), Ford will finally introduce the refreshed Everest sometime this year. Like its pickup truck sibling, the Ranger, the 2019 Everest will have a slightly re-worked exterior. Though the changes don’t look as dramatic as the Ranger’s, the revamped Everest will up luxury features to keep up with the competition. Like the Ranger, the Everest will benefit from a brand-new drivetrain: the Ranger Raptor’s bi-turbo 2.0-liter motor mated to a 10-speed automatic. Mid-trim models will likely follow suit with a single-turbo 2.0-liter motor while entry-level models will continue with a carryover 2.2-liter. 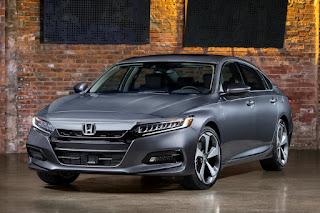 After a rather quiet year, expect 2019 to be a busy one for Honda. Headlining their new offerings for the year will likely be the all-new Accord. Already previewed for other Asian markets such as South Korea and Thailand, Honda will want to have another crack at the executive sedan market, especially after chief rival Toyota sort-of trashed talked the Accord. It’s unlikely that Honda Cars Philippines will follow Thailand’s lead and introduce the Hybrid variant; instead, expect it to gain the Civic Type R’s 2.0-liter VTEC Turbo engine. Honda may also follow Mazda’s lead and go for the self-driven executive now especially since the new Accord does have sharper handling thanks to its lower center of gravity, stretched wheelbase, and use of laser welding technology for increased rigidity. 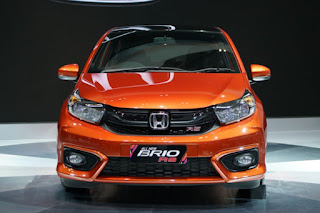 Previewed by the Small RS Concept at the Philippine International Motor Show or PIMS, the all-new Brio has already been announced for export from Honda’s manufacturing base in Indonesia. Going for a “above-class feel” the 2019 Brio gains a fascia reminiscent of the current Mobilio while also swapping the controversial glass tailgate for a conventional one. Like all other Hondas, the Brio finally gets the RS treatment too. For Indonesia, the 2019 Brio gets a 1.2-liter i-VTEC engine, but this was done more to satisfy tax laws there. For the Philippine market, expect that it’ll continue with a 1.3-liter i-VTEC engine, unless the cost of the 1.2-liter is considerably cheaper to make the Brio more competitive price-wise. 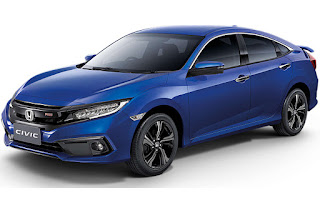 Already on sale in neighboring Thailand where it’s sourced, it’s just going to be a manner of months before Honda launches the refreshed Civic for the local market as well. While the mechanicals are carried over (normally-aspirated 1.8-liter or turbocharged 1.5-liter), the refreshed Civic does offer a myriad of exterior and interior changes to welcome 2019. In Thailand, the top-of-the-line Civic now comes with Honda SENSING, a driver-assistive suite that includes collision mitigation braking, adaptive cruise control with low-speed follow, lane keeping assist, road departure mitigation with lane departure warning, and auto high beam. It’s currently a toss up whether HCPI will offer this for the Philippine market, but if they want to maintain their leadership in the compact car segment, they should. 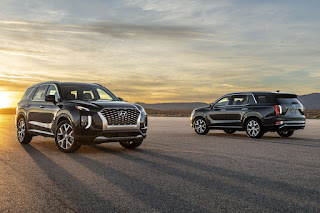 Hyundai Philippines once offered the Grand Santa Fe and is currently offering the P 8.008-million Genesis G90 so it makes perfect sense for them to add the full-sized Palisade SUV even at the P 3-4 million range. Based on the Santa Fe platform, the Palisade is visually unique and realizes even higher levels of luxury with the use of Nappa leather and real wood trim. In markets such as the US, it’s offered with an Atkinson-cycle V6 engine gasoline, but expect the Philippine model to have the tried-and-tested R2.2 diesel. And with the Santa Fe sticking to a purely 2WD layout, the Palisade may be the one to benefit from Hyundai’s HTRAC all-wheel drive system. 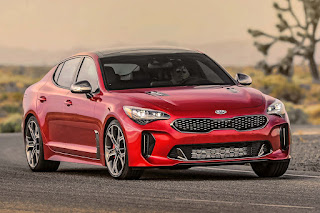 With Kia changing hands, they’ll surely want to make a big splash. The best way to do so would be to introduce a performance-oriented vehicle, and in their case, it’s the Stinger. It doesn’t fit the typical performance vehicle mold (it’s a 5-door fastback, after all), but it’s something Kia needs to prove that they have “the power to surprise” once more. The Stinger is an executive sedan in size, but should deliver more thrills thanks to its rear-wheel drive layout (think Hyundai Genesis Coupe but in a more practical form). The sleek, sexy interior and driver-centric interior is backed up by two performance-oriented engines. Though there’s a twin-turbocharged V6 available, expect the Philippine model to have the 255 horsepower 2.0-liter engine instead. 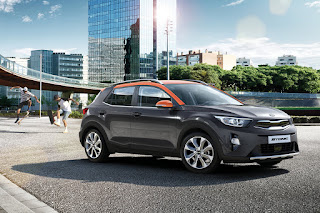 While introducing the Stinger will undoubtedly grab headlines for the revitalized Kia, it’s products like the Kia Stonic that’ll help them grab market share. Already considered for launch by Kia’s previous distributor, the Stonic is Kia’s entry into the growing B-segment crossover segment and should enable the all-new and bigger Soul to move more upmarket. And with the success of its platform twin, the Hyundai Kona, it just makes sense for Kia to try to do the same. The Stonic is more grown-up with its Sportage-inspired design minus the Heckblende taillight treatment. If Kia wants to go the same direction as Hyundai, expect a 2.0-liter engine under the hood. However, if they want to be different though, they can opt to give it either a downsized 1.4-liter gasoline (to make it cheaper) or a 1.6-liter turbo diesel (to make it more value-oriented). 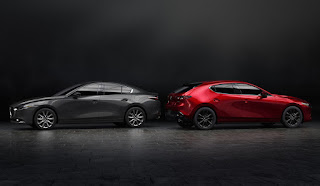 Attractive financing schemes is one way to indicate that a model change is soon on the way and that’s exactly the case with the Mazda3. The first of Mazda’s seventh-generation models, the all-new Mazda3 is defined by its evolved sense of beauty inside and out. It also promises a heightened sense of driver involvement thanks to a brand-new platform. The big news is certainly the new Skyactiv-X SPCCI engine, but because of its Euro 6 requirement, there’s almost zero chance of it arriving here. Expect the Philippine market Mazda3 to remain powered by upgraded versions of the 1.5- and 2.0-liter Skyactiv-G engines. 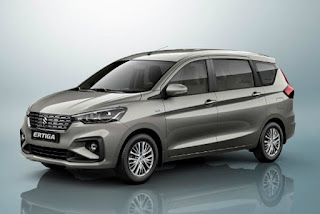 As one of Suzuki Philippines’s best-selling vehicles, the Ertiga needs an update to keep up with the slew of new small 7-seater MPV/SUVs. Thus, expect the all-new Ertiga to drop into the market very soon. Dimensionally larger than the current model, the 2019 Ertiga  now gains a more MPV-like styling this time. Despite its larger size, its move to the HEARTECT platform should help keep its curb weight in check, maximizing the performance of its 1.4-liter 4-cylinder engine. 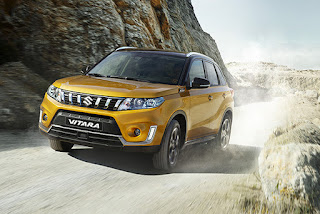 If the whispers around the grapevine are true, Suzuki Philippines may soon introduce the refreshed Vitara. For 2019, Suzuki’s sub-compact crossover gains a new nose with vertical slats on its grille, and revised headlights and front bumper. Inside, it’s largely unchanged save for new gauges and climate control buttons. It’s more than likely that the Vitara will continue with its normally-aspirated 1.6-liter engine, but reports are also strong that Suzuki may opt to give it more punch thanks to a turbocharged option. In that case, expect the engine to be the 1.4-liter BoosterJet that makes 140 horsepower and 220 Nm of torque. If that’s the case, expect SRPs to go up anywhere between 10 to 15 percent. 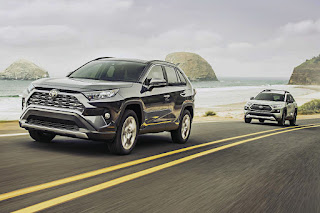 With the launch of the all-new Toyota Camry, Filipinos now have a taste of the Toyota New Global Architecture or TNGA and it’s more than likely that Toyota Motor Philippines will add even more TNGA-based vehicles this year. The C-HR sub-compact crossover remains a good bet, but that’s one year late; while the all-new Corolla is looking to be a year too early (it needs to be assembled in ASEAN). So that leaves the RAV4 to be the next model to gain the benefits of TNGA. Though unlikely to be launched by 2019, if it does arrive it does look bolder and more rugged than ever. It even boasts of better off-road chops thanks to additional ground clearance and a 57 percent stiffer body. The outgoing 2.5-liter engine may also be swapped for a 2.0-liter if Toyota Motor Philippines goes solely for a 2WD line-up due to increased costs. Aside from the RAV4, the IMV trio (Innova, Fortuner, Hilux) are also due for a refresh.
at 7:00 AM

Email ThisBlogThis!Share to TwitterShare to FacebookShare to Pinterest
Filed Under: carguide.ph, Feature