Concerned About the Security of Keyless Entry Systems? Kia May Have the Solution 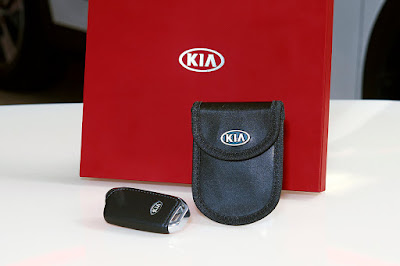 The popularization of keyless entry and ignition systems has prompted some to question its vulnerability, especially against “cloning.” Well, Kia seems to have found a way, and the cost is just a £9.99 (~ P 642) pouch they call the KiaSafe case.

Available in the U.K. for both new and existing Kia owners, the KiaSafe case can stop thieves who use relay attack devices to obtain the frequency from the car key that enables them to access the car in question. The case acts in a similar way to a Faraday cage which uses a layer of metal within that blocks the device that thieves use.

Naturally, Kia sees this pouch as a short-term solution. The Korean carmaker’s R&D engineers are already working to ensure that future keyless entry systems are rendered as close to impervious to attack as possible. For instance, they are looking at using Ultra-wideband (UWB) frequencies or adding “sleep” buttons for added protection for upcoming models.
at 1:58 PM