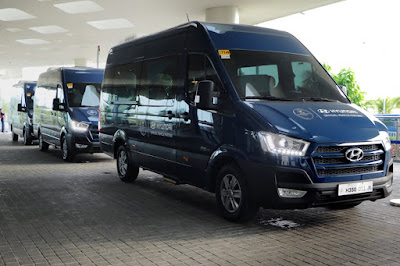 Hyundai Asia Resources Inc. (HARI), represented by its luxury H350 van and by the Hyundai Grand Starex, shone once again on the global stage as Official Vehicle Partner of the 2018 FIA Motorsports Conference, organized by the Fédération Internationale de l'Automobile (FIA) in collaboration with the Automobile Association of the Philippines (AAP).

With the theme, “Empowering the Future, Unlocking Motor Sport’s Potential,” the sixth edition of the FIA Sport Conference and the first ever to be hosted in Asia welcomed over 200 delegates of FIA member organizations from 93 countries. Delegates flew in to discuss motorsport safety concerns and the future and growth of the sport in the face of fast-emerging modes of alternative transportation and entertainment.

Hyundai has long been a player in international motorsports. From 1998 to 2000, the prestigious World Rally Championship (WRC) saw iterations of the Hyundai Accent F2 class. Hyundai made a fierce comeback after a 10-year break with the Hyundai i20 WRC debuting at the 2014 Rallye Monte Carlo. That year, the new team led by Thierry Neuville scored a top-three finish for Hyundai and went on to garner more wins for the Korean auto giant in succeeding WRC events.

“People think that auto racing is just for recreation and entertainment. But auto-racing events were created so that manufacturers could rigorously test and calibrate their concept cars before rolling them out to the public.,” noted HARI President and CEO Ma. Fe Perez-Agudo. “The cars you see on our roads today are products of the data and technology derived from motorsports events. Hyundai’s engagement with FIA puts a stamp on our never-ending work to make Hyundai innovation ever more accessible to the most diverse markets, and so unlock their potential to get more out of life.”

FIA is the Paris-based governing body of the world’s most prestigious four-wheel motor sports events, including Formula 1 (F1), the World Rally Championship (WRC) and 24 Hours at Le Mans.
The AAP, formerly known as the Philippine Motor Association (PMA) is the country’s biggest and oldest auto club. They are committed to promoting the general welfare of Filipino motorists.
at 12:03 PM

Email ThisBlogThis!Share to TwitterShare to FacebookShare to Pinterest
Filed Under: Hyundai Corporate, News