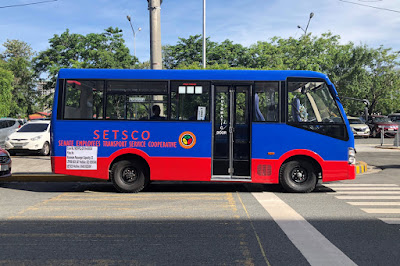 The occasion also signified the beginning of the PUVMP, with the Senate Employees Transport Service Cooperative (SETSCO) as the pilot operator.

The modernized PUVs are assembled using the Isuzu QKR77 platform which has been modified specifically for PUV use. Among the changes done by Isuzu include a longer wheelbase (3,360 millimeters), a swap of fuel tank and battery’s location to accommodate the side-door, and the installation of a front stabilizer for added safety and comfort. It’s powered by a Euro IV-compliant 4JH1-TC diesel engine delivering cleaner emissions and excellent fuel economy.

The Isuzu Modern PUV adheres to the “Gawa ng Filipino, para sa Filipino” adage since the platform itself is assembled in IPC’s Biñan, Laguna assembly plant. Meanwhile, the rear body itself is designed and manufactured by Cavite-based Almazora Motors Corporation.

This new Isuzu Modern PUV is compliant with the agreed-upon standardized dimensions (Philippine National Standards PNS 2126:2017). It’s classified as a Class 2 PUV (6,270 millimeters in length, 2,525 millimeters in height, and 1,795 millimeters in width) with a 23-passenger side-facing seat configuration. The passenger cabin floor-to-ceiling height and gangway width are 1,780 mm and 830 mm, respectively, providing more space for passengers to move inside. The passenger door is safely situated on the right-hand side, facing the sidewalk. Other design features of the body include panoramic windows and windshields, full-body insulation with GeneQ shield, automatic door closer, and provisions for persons with disabilities.

These new PUVs also offer warranty coverages, options not available for old jeepneys: 3 years or 150,000 kilometers for the cab and chassis, and a separate warranty for the body, air conditioning and other accessories. Additionally, IPC will be offering a three-tier parts line-up with the most affordable, “Isuzu Select Parts” being 50 percent cheaper than “Isuzu Genuine Parts.”

Admittedly, the cost of these modern PUVs is still quite high (P 2,080,000 for the configuration selected by SETSCO), but the different stakeholders are finding ways to reduce the price. For IPC’s part, they’re hoping to shift to a standardized body type and an assembly line process in order to make them quicker and more affordable. For the government, they’re looking to complement the modern PUV program with a “5-6-7 program.” With this, the government subsidizes 5 percent of the purchase price (at a maximum of P 80,000) while the rest can be financed at a fixed interest rate of 6 percent for 7 years.

“This is truly a landmark event for the PUV modernization program of the Philippine government and Isuzu Philippines Corporation’s active participation in this timely project. The fruitful collaboration between IPC and the wholly Filipino-owned Almazora Motors Corporation ensures that our commuters ride only in world-class public utility vehicles that also take into careful consideration passenger safety, comfort, and the particular locality’s needs,” IPC President Hajime Koso explained.

“The formal turnover today at the honorable institution of the Senate of the Philippines, only means that we are starting the PUVMP program not just in the right foot, but in the best way possible, as our modernized jeepneys will provide safe, convenient, reliable and comfortable transport services to the people who render public service on their part,” he added.

Isuzu Philippines Corporation, which has been operating in the country for more than 20 years, has been known to produce durable and reliable trucks, light commercial, and commercial vehicles that are perfectly suited for local driving conditions. In a span of over two decades, the company has established a strong network of 40 dealers that have provided excellent after sales service and parts.

It is this unmatched brand reputation that has led SETSCO to choose Isuzu as the vehicle brand for the pilot program of the PUVMP. According to SETSCO’s franchise holders, a program of this magnitude would require that all aspects of the program “must go right from the start”, as a pilot project ultimately determines the future course of the program as it is applied in other locations in the Philippines.

SETSCO, which has shown to comply with the requirements prescribed by the Department of Transportation (DOTr), has been run by Senate employees since 2004 and now has joint ownership of 35 franchises granted by the Land Transportation Franchising and Regulatory Board (LTFRB).

The PUV Modernization Program is envisioned to replace some 250,000 jeepneys nationwide with new, safer, environment-friendly, and comfortable public utility vehicles in the next 5 to 6 years.
at 3:14 PM