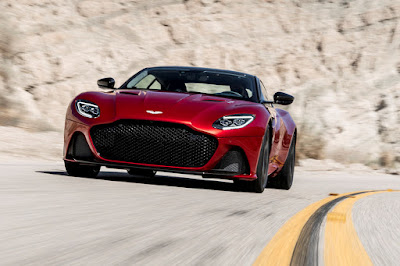 The Aston Martin Vanquish S is now gone and with that, the old-style Aston Martin chassis and normally-aspirated V12 engine. Don’t fret though, because the car that replaces it, the 2019 Aston Martin DBS Superleggera is just as powerful and opulent.

Based off the DB11 platform, the DBS Superleggera now gets a 715-horsepower, 900 Nm of torque 5.2-liter turbocharged V12 engine. Coupled with a brand-new transmission and gearbox, it decimates 100 km/h in about 3.4 seconds going all the way to 340 km/h.

Style-wise, it does gain the new-generation Aston Martin design cues, but mixes them up with more traditional elements found, in particular, in its front grille. It gets DB11-style “curlicue” and “aeroblades” to aid aerodynamics while controversially, it also nixes the Aston Martin wing badge at the back; preferring instead to spell the words, “Aston Martin”.

Arriving with bespoke Pirelli tires, the DBS Supperleggera comes only with two rim options: standard and lightweight; both are forged and are sized 21 inches.

Aston Martin Manila has announced that they’ve begun to take orders for the all-new DBS Superleggera with deliveries likely to start by the year end. Price depends on the exact personalization options chosen by the owner, but expect it to be slightly more affordable than its Italian rival, the Ferrari 812 Superfast.

Oh, and in case you want to know, Aston Martin does plan to dust off the Vanquish nameplate once more, but that’ll likely come sometime 2021 as their top-of-the-line series production “hypercar” model.