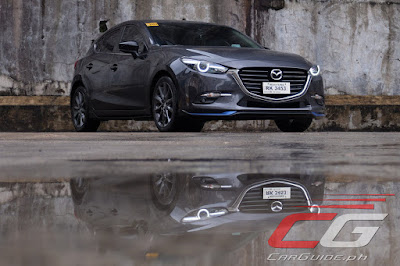 Mazda Philippines basically put money where their mouth is by letting us drive a 2017 Mazda3 for a year. They likely knew what they were getting: an honest look into Mazda ownership without any pretenses. Now, four hundred twelve days and 7,510 kilometers later, this is our verdict: Mazda, both as a maker of driver-centric vehicles and as a provider of aftersales service for said vehicles has come a long, long way.

Before current distributor Bermaz Auto Philippines (BAP) took over the brand in 2013, the ownership experience for Mazda was a mixed bag at best. Knowing their less-than-stellar reputation when it came to aftersales service, Mazda acted on it immediately, introducing the industry’s first all-inclusive Yojin-3 package. Aside from offering a 3-year / 100,000-kilometer warranty and roadside assistance, both of which were becoming standard fare at that time, BAP added 3-year free periodic maintenance service (parts and labor) at no extra cost.

Interestingly, purchasing spare parts for the Mazda3 proved to be somewhat difficult, especially if you’re the DIY sort of guy. In our experience, buying anything from the parts department requires you to share your vehicle’s plate number or conduction sticker number. Although this guarantees a proper fit, they’ll also question you as to why you need that particular part. From the looks of it, your vehicle record will be updated too, indicating that you got these parts for your car as well. Telling them that you “need spares” is typically good enough, but it nonetheless caught us off-guard when we’re used to just buying parts without any sort of interrogation.

Perhaps even more surprising is that the Mazda3 doesn’t bode too well for personalization. It’s actually pretty hard to hunt down Mazda genuine accessories locally, and even if you get third-party ones like WeatherTech floor mats, they do require a lengthy wait. We actually had to resort to getting stuff from both Japan and the US; and these are the simple stuff too like a stainless-steel rear bumper guard. Imagine those wanting something a bit more exotic. Oh, and on a side note: don’t get the Machine Gray touch-up paint. Not only is it hard to apply, it doesn’t remotely match the factory color).

On the road, the Mazda3 itself proved to be fun and dependable. It’s a great runabout, consuming half the fuel compared to our compact crossover while returning double the fun when driven long distances. It’s worst economy figure of 7.63 km/L easily matched the best our all-wheel drive crossover could muster in traffic, while its best figure of 15.62 km/L done on the highway, could easily match some diesels. We did runs with both the i-stop on and off, and with the system on, you see gains of 10-12 percent. Translated to peso savings, based on the distance we traveled, we saved P 4,258.24 based on current gas prices (or 316.3 kilometers or 8 trees based on the Mazda3’s fuel economy monitor). And though Mazda recommends Shell Fuel Save Unleaded, we recently discovered that UniOil’s Euro 5 fuel actually made the car run a lot smoother.

There’s also not much to complain about the Mazda3’s fit and finish. Overall, it remains fresh and cutting-edge, a big surprise given that the all-new model is just around the corner. The design is impeccable and together with upscale materials, it does give it a “class-above” vibe. That said, we do see some areas for improvement.

For one, there’s the front fender liner which is prone to warping near the edge. Mazda Philippines attributes this to the Speed’s exclusive side skirts. Apparently, the fender liner rubs against the skirt and because of this, it causes the fragile plastic part to warp after a while. After calling their attention on the matter, they’ve discovered that it’s a common problem with the Mazda3 Speed and they said they’ll be issuing a service bulletin and should have a fix ready by the time the next PMS service is due in October (Mazda3 Speed owners, please don’t forget to thank us).

Second is the less-than-sturdy construction of Mazda’s replacement EFB (Enhanced Flooded Battery). Like any other battery manufactured by Motolite, the plastic body is weak and any overtightening of the battery tie down can cause small cracks causing corrosive gases to leak out. This has begun to eat through the Mazda3’s battery tie down. Again, we’ve called the attention of Mazda Philippines, and as such, they’ve begun instructing their service personnel to tighten the tiedown by hand and not using a ratchet wrench (that’s something you Mazda3 owners should be thankful for again). As for our battery and tiedown, we’re still waiting if these will be replaced under warranty. And even if it’s not, we’re actually toying with the idea to have it replaced at our expense for safety reasons, perhaps in October.

Finally, we go to the high-gloss piano black accents. While they look great when new, they’re highly susceptible to hairline scratches, even more so than the material used by Honda or Toyota. We’ve addressed this by adding a clear protective plastic courtesy of Foilacar called Clarita. It’s meant to be used for exterior applications and thus cannot follow the fine contours of the switch bezels too well, but at least the general area’s protected and that’s what’s important. A note to Mazda: please use something that doesn’t scratch easily for your future products, your owners will love you for it.

Surely, ownership of the Mazda3 hasn’t been perfect. It has its fair share of ups and down. Yet, for the most part, it’s provided us a genuine insight at how its distributor, Bermaz Auto Philippines, has managed to turn the ownership experience around. It’s no secret: by and large, Mazda’s dealer group is composed mostly of the same dealer group that handles a mainstream American brand. Yet, complaints about the former aren’t as vocal and numerous as the latter.

The secret, it seems, it down to how Mazda structured its team. Whereas the American brand is more focused on sales and marketing, Mazda Philippines actually has more people dedicated to aftersales and customer support (33 percent of their total manpower count is dedicated to aftersales). Their dedication to improving the ownership experience is pretty much aligned to what Mazda’s doing globally. With Kizuna, Mazda wants to develop an inseparable bond between car and its owner. And with that, we’re willing to take the plunge and put money where our mouth is. This long-term test may have wrapped up for now, but it’s certainly not the end. We’re officially welcoming this 2017 Mazda3 Speed to our garage and hopefully, that great ownership experience continues for the years or decades to come.

Out of Pocket Expense:
Past Updates:
at 8:56 AM