Texting While Driving is Like Driving with Your Eyes Closed 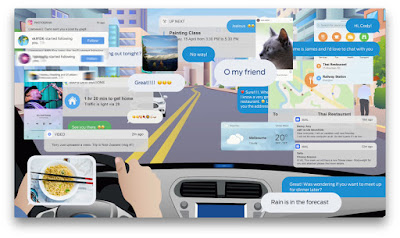 Every text, emoji, and selfie that captures your attention limits your awareness while driving, putting you and those around you in unnecessary danger. Yes, even “just one” text can cause one accident. And that’s one too many.

You’ve heard it before, but the reality is that every time you pick up your phone while driving, you see less. You stop looking around at your environment: in front, behind, to the right and left. Your field of vision shrinks. You don’t even see what’s in front of you.

Research done by the American Psychological Association shows that the brain has difficulty processing two tasks simultaneously. It can switch between the tasks but will perform each more slowly. Many people think they can do two things at once, like talking or texting on the phone while driving, but it’s just not possible to concentrate fully on both. Drivers stop monitoring their environment. And new drivers in particular aren’t in the habit of scanning the road for hazards, with a phone in hand, it’s an even more dangerous combination.

Matt Gerlach is one of Ford’s most advanced driving instructors, and he has spent the past 10 years training engineers to become expert drivers at Ford’s testing center in Australia.

“In my experience of training hundreds of drivers, I’d say that even normal, everyday driving uses around 85 percent of your mental load. Sending one text or selfie, and even talking with a passenger, can overload the brain while driving, increasing the risk of an accident.”

Further study by the National Safety Council shows that distracted driving cuts a driver’s field of vision by as much as 50 percent. This means that drivers don’t “see” important objects that are right in front of them, like red lights, pedestrians and obstacles in the road, putting everyone at risk.

“When you’re using 85 percent of your brainpower to drive, your mind isn’t capable of doing much else,” adds Gerlach. “Regardless of whether you’re a professional or new to the road – you will be a safer driver if you understand how much of your brain you’re using just to drive the car.”

Experts have identified four main types of driver distractions:
Using a mobile phone while driving is all tantamount to four!

Despite the very real dangers of using a mobile phone while driving, people throughout Asia Pacific often ignore the warnings, as evidenced by the data from a 2017 Ford survey:
Although Ford is working on advanced restraint systems and innovative driver assist features such as Ford Co-Pilot that integrates things like Pre-Collision Assist with Pedestrian Detection and even hands-free technology such as Ford SYNC, ultimately, it is best to keep the eyes and minds on the road for safety.

Put your phone down to stay aware of everything happening around you.
at 7:30 AM