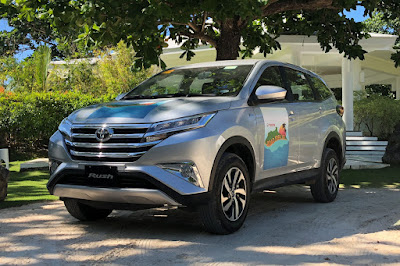 We just happened to finish shaking down the much-awaited Toyota Rush with a quick zip around Manila, Angeles, Bataan, and Tarlac. While our impressions aren’t enough for a full-on first-drive, we did discover a lot of things with Toyota Motor Philippines’ first-ever sub-compact SUV offering.

Here are 5 observations we’ve made that we think are important to would-be buyers.

If buyers used looks as the only metric to buy a small SUV, the Rush wins hands down. Compared to everyone else, it actually looks convincing. Its blueprint—220-millimeter ground clearance, 31-degree approach, and 26-degree departure angle is great for SUVs, but the crisply styled body bolted onto it isn’t bad either. Some say it’s a bit derivative, but overall, not one line looks out of place. It’s clean, pleasant, and modern. Inside, it’s fairly the same story. As expected in this price point, the materials used are hard to the touch, but the overall execution is far more modern than something like the Avanza or Wigo. In fact, we reckon that if the Avanza came out right now, it’ll benefit a lot from the Rush’s interior.

When Toyota called the Rush an SUV, there were some apprehensions and raised eyebrows. Given it shares the Avanza’s platform, everyone simply dismissed as “an Avanza on stilts.” In reality though, Toyota’s managed to work their magic to make the Rush feel like an authentic SUV. In particular, the high eyepoint is wonderful. Not only does it emphasize the Rush’s high ride height, but it makes it easier to maneuver through traffic. On the flipside, the headroom, especially at the front, feels less compared to Toyota’s entry-level MPV.

If there’s one surprisingly pleasant surprise about the Rush, it’s the way it handled itself on the road. Admittedly, our expectations aren’t really that high, but in the end, it passed this road trip with flying colors. The steering is light and while the body does tend to tip through hard cornering, it always feels secure and stable. The steering actually lightens up at higher speed, but it never once posed a problem. The ride’s also firm, but that’s to be expected on a vehicle designed to carry 7 adults. Still, NVH is well-sorted. In particular, we love how it’s extremely quiet even at highway speeds.

#4. Best enjoyed in the city

Speaking of speeds, the biggest question mark looming over the Rush’s head is the performance of its 1.5-liter Dual VVT-i. With 104 horsepower and 136 Nm of torque mated either a 5-speed manual or 4-speed automatic, one would think it’ll end in some lackluster performance. In reality, it depends on where you take it. For as long as you keep to city speeds (below 80 km/h), it’s got reasonable pace even when carrying a complement of 4 people and luggage (including a giant cooler) on board. The engine, despite being shared with the Avanza, is far less vocal—a product no doubt of better NVH. It’s only when the speeds climb up that the pace turns glacial. Going for the manual helps things a bit, but whatever the gearbox, 100 km/h comes in at around 3,000 rpm. Obviously, this doesn’t do wonders for the fuel economy, dropping to around 12 km/L on long cruises (NLEX and SCTEX) compared to 15 km/L when doing mixed pace.

#5. The base version’s great value

As with any new vehicle, most of the attention is squarely focused on the top-trim 1.5 G. And for good reason: it’s got all the ingredients for success because it’s got 7 seats, good value, and is a Toyota. That said, Toyota’s done something unique with the Rush and with a single vehicle, they’re aiming not just for the Honda BR-V crowd, but the EcoSport and Vitara as well. With that, the 1.5 E presents itself as an even better proposition. The absence of the third row and some cosmetic trimmings aside, it’s actually well packaged and priced; it may be the Rush variant to get.
at 5:56 PM