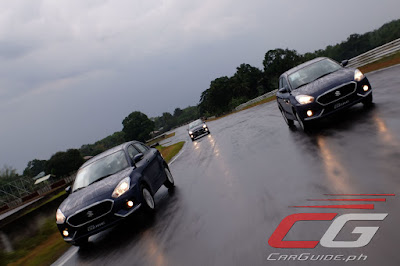 Blame inflation or the weakening pesos, but nowadays, you can’t get a decent sub-compact sedan for less than P 700,000. You can get a teeny-tiny hatchback for sure, but if TNCs won’t allow you to use it to ferry passengers, imagine how compromised this choice would be for those with families. Now, in a rather surprising move, here comes the 2018 Suzuki Dzire—a sedan that manages to tick all sorts of boxes including a price tag that tops out at P 698,000. This could be the best bargain in the entire Philippine automotive industry.

Understanding how Suzuki has managed to make the 2018 Dzire cheaper than its predecessor (it used to be P 718,000), we have to go down to its underpinnings, specifically its all-new HEARTECT platform. Lightweight yet highly rigid, engineers were able to reduce the number of cross bracing reinforcements by using continuous, smooth, and curving structures. At the same time, they were able to optimize the entire underbody together as opposed to reinforcing individual components. The result? A platform that weighs 23 kilograms less while achieving much better handling, comfort, and safety performance.

Suzuki’s focus on weight reduction has also afforded the use of smaller components. Mr. Kenny Adia, Senior Product Supervisor for Suzuki Philippines’s Automobile Division reveals that the brakes on the all-new Dzire are actually smaller than its predecessor and yet, there’s no detriment to the overall braking performance. Why? It’s simply because there’s much less mass to stop: the 2018 Dzire’s curb weight is just 895 kilograms or 175 kilograms less than the outgoing Dzire.

Topping that all off, the all-new Dzire uses Suzuki’s brand-new automated manual transmission which they call Auto Gear Shift (AGS) technology. Made by Magneti Marelli, it’s effectively a 5-speed manual gearbox with an electro-hydraulic actuator that operates the clutch and gearshift. Thus, Dzire’s transmission is mechanically simpler and lighter compared to a conventional automatic or CVT. Furthermore, Mr. Adia says that the maintenance cost of AGS is much like a manual gearbox with the same sort of parts (clutch disc, release bearing, and the like).

The Dzire’s, pardon the pun, desire to reduce weight negates the need for a larger engine. It means that the 1.2-liter K12M 4-cylinder proves more than enough usable performance. In fact, the Suzuki track marshals said that the century mark arrives at 12 seconds—not bad for an 82-horsepower, 113 Nm of torque engine.

While there will be up to 5 colors to choose from (3 for the base GL variant), Suzuki Philippines put their best foot forward and used the Dzire’s image color for this preview: Premium Oxford Blue. At a glance, it’s clearly not any more a hatchback with a trunk lid slapped on. Designed as a sedan from the get-go, it has unique A- and C-pillars tying up the lines neatly. It’s slightly wider than its predecessor, a fact actuated by the new polygonal grille. The vertically-arranged headlamps and LED taillights also create a much more elegant design compared to others in this segment.

Inside, the Dzire’s all-black interior proves well-matched to its simple, honest character. Its layout is straightforward with highly-legible gauges, large-rotary dials for the air conditioner, and crisp-feeling stalks and buttons. Yet, there’s some hints of sportiness too from the flat-bottomed steering wheel and vertically-resting tach and speedometer needles; and whiffs of practicality with the respectably-sized storage bin in front of the shifter and generous rear quarters (there’s 69 millimeters more space between the front and rear seats) with their own armrest and air conditioning vents.

Given that the Dzire looks like a sub-compact sedan, it’s safe to assume that it drives like one, right? To some degree, yes; but admittedly, it also requires a bit of a learning curve, mainly because of the Auto Gear Shift system.

For one, the shifter pattern is different. Instead of the usual PRNDL, you get RND on the Auto Gear Shift. And though you can move the gear lever around even with the car off, starting it requires that the shifter be in Neutral with the brakes applied; otherwise a failsafe will kick in. The same goes when the Dzire’s in motion and the shifter somehow finds itself going into Reverse. A safety system prevents the shift and alerts the driver.

Next, driving it like a conventional automatic produces some noticeable shift shock. Instead, AGS is best experienced by lifting off the gas slightly for a second (image a clutch being depressed) whenever you want to change gears up. This action is somewhat counterintuitive for those who’re used to driving an automatic but should come naturally to those who drive stick.

Finally, the Dzire is one of the handful of Auto Gear Shift-equipped cars to come with a “creep” function. This allows the car to move forward slightly in stop-and-go traffic negating the need to constantly push on the accelerator, reducing the wear-and-tear on the AGS. That said, it can only be engaged when the transmission is kept in Drive. Shifting from Neutral to Drive, as some geniuses do in traffic, without having the foot on the brake pedal activates the failsafe system (see number one).

We’ll have to judge the Dzire’s public road performance some other day, but in the safe confines of the Batangas Racing Circuit, it’s easy to get accustomed to the Dzire’s quirky gearbox. The “lift and squeeze” method brings out some pretty sensible performance, however, this gearbox is best experienced with the manual override engaged. During these times, the gearbox is smooth, quick, and predictable (because you’re the one doing the shifting) resulting in a surprisingly sporty experience around the track.

The engine is somewhat buzzy and coarse at the top end, but otherwise, it’s significantly quieter than the model it replaces. Even if it’s built as a commuter car, there’s some degree of sportiness baked into it too. The steering is pointable and responsive, while body roll is largely controlled. If there’s one weakness, it’s the lack of mechanical grip from the OE Apollo 185/65 R 15 tires. Take a bend, especially something like an S-bend spiritedly, and the tires will squeal. A steering correction, a scrub of speed, or both brings the Dzire back in line. That said, if there’s one car that’ll benefit from stickier aftermarket tires, it’s this one. The suspension can clearly do a lot more.

Considering all the 2018 Dzire is, Suzuki is poised to have yet another big hit on their hands. This inflation-proof sub-compact offers an elegant design built atop solid new foundations backed up its great value-for-money pricing. With two models, the manual transmission GL (P 638,000) and GL+ with AGS (P 698,000), it’s targeted towards buyers who’re new to the Suzuki brand but who’re after practicality and affordability says Mr. Cecil Capacete, Assistant General Manager for Suzuki Philippines’s Automotive Division. There’s certainly a lot going for the Dzire and with that, it’s sure to shake up the segment. 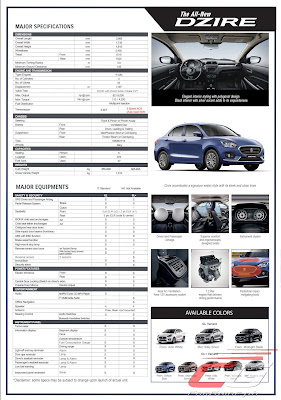