Mazda Puts KODO Design to Work Even in Their Car Keys 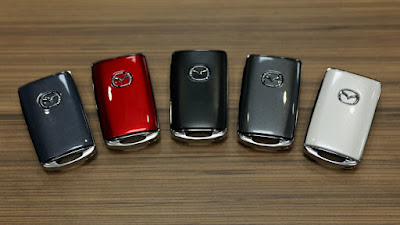 When was the last time you heard a car company talk in detail about their car keys? With the exception perhaps of premium carmakers such as Aston Martin, Pagani, or BMW (with their Display Key), most of the time, they’re simply off the shelf components with little regard to its design.

As early as mid-2016 though, Mazda began to realize the changing role of car keys in modern cars. Before keys fobs were all about function than form—it was all about pressing buttons that locked or unlocked the doors. Thus, it was ergonomically sound to have large, clear buttons on the key’s surface, sometimes to the detriment of branding or logos.

However, as car keys moved away from physical operation, Mazda designers opted to re-examine the humble car key. As owners pick their keys up and put them in their pocket (or bag), the carmaker realized that it’s the first form of contact a driver would have with their car. Given this intimacy, it’s imperative that the car key must feel special. Their solution is to give it a KODO design.

First up, they separated the key’s functions and branding. Since physical operation is highly unlikely in this day and age, Mazda moved it over to the side. This emphasizes the Mazda branding front and center on the key’s surface. In early stages of the design, there were plans to make it asymmetrical, but stability, they thought, was also important so they settled for a symmetrical design.

Then, the texture of the key surface itself is thick, emphasizing their new premium positioning. Even the surrounding area is made of a genuine metal frame (the area around the key ring, actually) while the rest of the “metallic decoration” is made of plastic because it hides the keyless radio wave antenna.

A fun fact is that in their new-generation products such as the Mazda3 and CX-30, designers purposely hid the key hole not just to cut aesthetic clutter, but they did it do reduce wind noise as much as possible. They key hole is now found when you pull the driver’s door lever, and the emergency key is found at the back of the key fob. When using this emergency key, Mazda continued with its human-centered design taking into account the necessary space so that the emergency key can be turned without being burdened with pulling the door lever.

Moreover, while it’s not uncommon to have accessories such as key cases or covers, Mazda’s accessories team was excited to know that the key shell could be removed. A year into the key’s development, they came up with a “selective key shell” that allowed owners to swap key shells making it more personal.

At first, the accessories team looked at materials such as wood or leather that match the interior colors or trims, but settled (for now) for key shells that echo the exterior colors because they perfectly symbolize the KODO design.

Mazda went into painstaking detail to make sure that the key shells match the car’s colors perfectly. With that, they ended up painting the key shell the same way as the car with Soul Red Crystal and Machine Gray Metallic painted in three layers as well!

Of course, the selective key shells aren’t cheap. For “simpler” colors such as Snowflake White and Polymetal Gray, it costs 16,500 yen (P 7,756~) while the Soul Red Crystal and Machine Gray ones cost 19,800 yen (P 9,308~). Regardless, Mazda says it’s a genuine expression of their design aesthetic, and admittedly, a left-field way of accessorizing a car.
at 11:00 AM