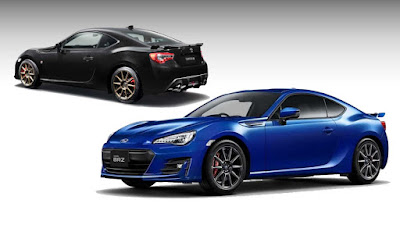 With confirmation that the second-generation 86 and BRZ are coming by mid next year, Toyota and Subaru are readying their own respective final editions of their rear-wheel drive sportscar.

Inside, the Subaru adds blue stitching to its seats and dashboard, while for the Toyota it gets bronze-colored ones. In the case of the 86 though, it adds a “Black Limited” logo stitched on the dashboard and a suede-like material for instrument panel hood.

For Toyota, the color scheme is reminiscent of the special edition GT Apex Black Limited which was the last special model of the AE86 Sprinter Trueno. For the Subaru though, there will be two colors on offer—Crystal Black Silica or WR Blue Pearl.

Mechanically, both versions remain unchanged. This means being powered by a normally-aspirated 2.0-liter flat-4 making 200 horsepower and 205 Nm of torque mated to either a 6-speed manual or a 6-speed automatic.

Either way, these sportscars are rare. So far, Subaru Germany will be releasing 100 units of the Subaru BRZ Final Edition, while for Toyota, only 86—43 manual and 43 automatics will be on sale in its home market of Japan.
at 10:23 AM