Mitsubishi Xpander Buyers: The Wait is Almost Over 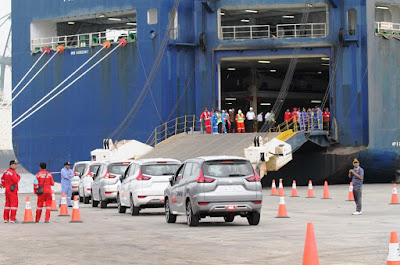 Buyers of the Mitsubishi Xpander: the wait is almost over. Mitsubishi says that first batch of the Xpander MPV has finally shipped from its state-of-the-art assembly plant in Bekasi, Indonesia and is heading to the Philippines.

Indonesian President Joko Widodo joined Mitsubishi Motors Chief Executive Osamu Masuko for the ceremony commemorating the export launch of the Xpander last April 25. The milestone comes after a year since the inauguration of the carmaker’s manufacturing plant.

This marks the first time Mitsubishi will export vehicles on a mass scale from Indonesia.

“I am delighted that our company can contribute to the growth of Indonesia, which has been so supportive since we first arrived almost 50 years ago. The export of Xpander is an important milestone in our ongoing business plan, and adds further to our strong foundations in ASEAN, which are key drivers of our growth in the region,” said Mr. Masuko.

Currently, the Xpander has been enjoying brisk sales in Indonesia with over 66,000 orders to date. It has become the Japanese carmaker’s best-selling vehicle there.

The Philippines, which is the first market to get the Xpander outside of Indonesia, has seen more than 2,000 reservations for their 7-seater MPV. If everything goes to plan, the first batch of Xpander MPVs should arrive at Philippine ports as early as next week. This means that customers who placed reservations should be able to drive their new Xpander off the showroom by the last week of May.
at 9:48 PM