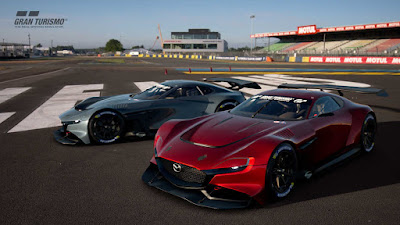 Attention: Gran Turismo Sport players, you can now be one of the first to (virtually) drive and race Mazda’s newest rotary sportscar, the RX-Vision GT3 Concept.

Jointly developed with Polyphony Digital Inc., the RX-Vision GT3 Concept is now available for download for the Playstation 4 game. Based on the Mazda RX-Vision from the 2015 Tokyo Motor Show, the GT3 version features an even more aggressive appearance, befitting a racecar. It’s powered by a 4-rotor Skyactiv-R engine. According to its specs, it makes 570 horsepower and 540 Nm of torque in a car that weighs just 1,250 kilograms.

Marking the release of the rotary-powered racer as well as Mazda’s 100th Anniversary, special 100th Anniversary events will make their way to Gran Turismo Sport. This includes a time trial for the RX-Vision GT3 Concept at the Circuit de Spa-Francorchamps in Belgium (details here) as well as a livery design contest (details here). Special prizes will be at stake including commemorative gifts shipped from Mazda.

The release of the RX-Vision GT3 Concept on Gran Turismo Sport is just one of the ways Mazda is beefing up its presence in digital motorsports. Moreover, due to current coronavirus circumstances, car enthusiasts all over the world can connect online and enjoy the same virtual experience regardless of country, region, language, or generation.

Players who use Mazda vehicles, such as RX-Vision GT3 Concept, in Gran Turismo Sport will automatically be granted seed rights to participate in the FIA certified Gran Turismo Championship (world tours) to be held in various locations around the world in the 2020 season.

Over 400,000 challengers from around the globe participate online in this full-fledged GT racing world championship that has been realized through a partnership between the FIA (Fédération Internationale de l'Automobile) and Gran Turismo.

Participants sign a contract with the manufacturer of the race car they will be using, and 12 brands, including official partners, along with 36 racers aim to be the best in the world in the final competition.

As Mazda is an official partner, drivers that choose to race with a Mazda car are able to participate in the final competition.