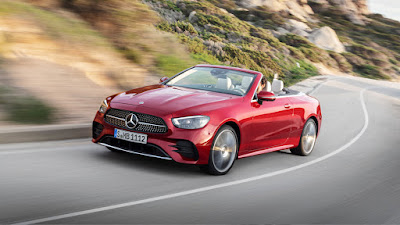 Well, it’s about damn time. Butts have suffered long enough sitting on hot leather seats, it’s surprising it’s taken this long for one carmaker to answer the call of designing seats which remain cooler for a longer period of time.

Rear-ends will love the 2021 Mercedes-Benz E-Class Cabriolet and its new sun-reflecting leather. The specially coated cowhide heats up much less than its untreated counterpart, and remains up to 13 degrees Celsius cooler in direct sunlight.

The specially coated leather reflects the near-infrared waves of the sun and thus heats up noticeably less and more slowly than standard leather, which absorbs heat radiation. This proves to be a major gain in comfort, especially with dark seat. Even with the soft top closed, the interior heats up less thanks to the cool leather. The special color and pigmentation of the sun-reflecting surface has no effect on the high-quality appearance and feel typical of a Mercedes-Benz.

While the feature is limited to just the E-Class Cabriolet, here’s hoping the feature it’ll be expanded to more Mercedes-Benz models in the future, particularly for those sold in hot weather markets.