EDSA to See Drastic Transformation When NCR Shifts to GCQ 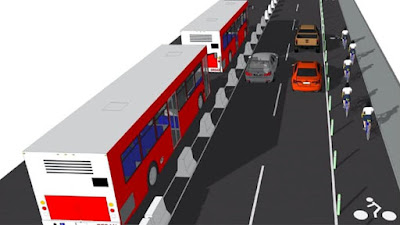 Spurred by the necessity to adapt to the “new normal,” the Department of Transport has just fast tracked the modernization of the public transport sector, especially along EDSA.

Greeting motorists as early as June 1, the two inner-most lanes will be dedicated to buses, separated by barriers. The middle lanes will then be dedicated to private vehicles, while the outer-most lane, separated by a barrier, will be for cyclists. Commuters who will need to take buses, can only access them via selected pedestrian overpasses near the predetermined 16 stops.

Along with the scrapping of the so-called “yellow lane,” the DOTr is rationalizing bus routes with 31 servicing the entire Metro Manila:
Along with these new changes, the DOTr will be implementing a two-phase introduction of mass transport.

For the Phase 1 (covering June 1 to 21), trains and bus augmentation, taxis, TNVS, shuttle services, Point-to-Point buses, and bicycles will be allowed to operate, with limited passenger capacity.

Tricycles will also be allowed, but subject to the prior approval of the concerned LGU.

In Phase 1, no provincial buses will be allowed to enter Metro Manila.

Meanwhile, for Phase 2 (covering June 22 to 30), Public Utility Buses (PUBs), Modern PUVs, and UV Express will already be allowed to operate, also with limited passenger capacity, along with the initial set of transport modes that were allowed to operate during Phase 1.

The railway will also resume operations in two phases with 11 stations in Phase 1 and 15 in Phase 2. This will be based on passenger demand: 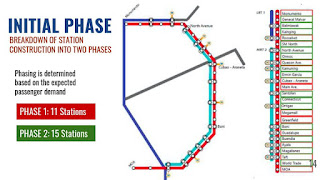 The DOTr and the LTFRB is also pushing for other modernization initiatives including automated fare collection for cashless payment and electronic toll collection (for those going through toll roads). Likewise, the LTFRB will roll out an online platform for the licensing, registration, and even hearing of cases for public utility vehicles.

The DOTr is also reminding all commuters to adhere to the following safety guidelines:

Email ThisBlogThis!Share to TwitterShare to FacebookShare to Pinterest
Filed Under: COVID-19, News, Traffic