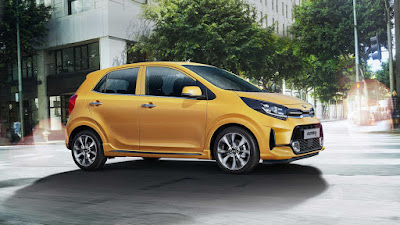 Kia has given its city car, the Picanto a refresh this 2020, with tweaked styling, an upgraded engine, and more tech than ever before.

Called the Morning in Korea, the 2020 model gains a new grille, headlights, and front bumper. The headlights, though still illuminated by traditional halogens, can be optioned with LED DRLs. The four-point motif is similar to the Forte GT’s. The front bumper has been re-shaped to look more like the upscale GT Line, while the rear gets sportier, and more angular lines including some faux exhaust cutouts. Other new touches include high-gloss black accents, LED taillights, a chrome belt molding, and new alloy wheel designs in 14-or 16-inch sizes.

Inside, not much has changed with the 2020 Picanto. A choice between a black and gray interior still exist, but a new “iconic” theme package has been made available. This model comes with an all-black interior with orange highlights. And despite its positioning as an entry-level city car, it comes with a myriad of features including an 8-inch floating infotainment screen, a new 4.2-inch TFT color display nestled in the gauges, and even a smartphone app remote control. Other premium features (at least for the Korean market) include heated/ventilated seats and automatic climate control.

In terms of flexibility, the 2020 Picanto impresses with its full flat seats. With the 60/40 split-fold rear bench folded, it can accommodate up to 1,010 liters of cargo.

For 2020, the Picanto debuts a brand-new engine. The 1.0-liter Smart Stream G 3-cylinder engine makes 76 horsepower at 6,200 rpm and 95 Nm of torque at 3,750 rpm. While that doesn’t sound impressive, with just 995 kilograms to pull (at its heaviest), it makes for a sensible urban car. Mated to a 4-speed automatic (the sole transmission available in Korea), it does up to 14.4 km/L in the city, and 17.6 km/L on the highway. A turbocharged version of the same engine is expected to join the line-up as well.

In terms of safety, the Picanto builds up on the current model’s stellar equipment and adds things such as tire pressure monitoring, driver’s knee airbag (for a total of 7), torque vectoring system, lane keeping assist, blind spot monitoring, and even driver attention warning.

With production and sale already starting in Kia’s home market of Korea, it’s just going to be a matter of time before the 2020 Picanto reaches the Philippines. This will likely happen sometime towards the end of this year, or perhaps nearly next year.