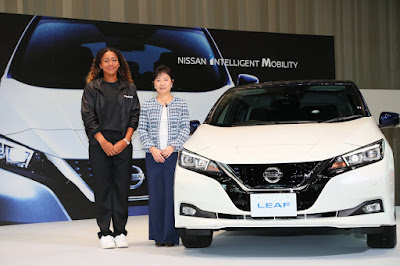 The announcement was made at Nissan’s Global Headquarters in Yokohama, marking one of Osaka’s first appearances in Japan since winning the title on Sept. 8.

Armed with her powerful groundstrokes and strong serve, Osaka became the first Japanese player to win a women’s singles Grand Slam. Born in Japan to a Japanese mother and a Haitian-American father, she moved to the U.S. when she was 3 years old and competes for Japan.

“This week has been a dream come to life, and I’m so honored to represent Japan and Nissan on the world stage,” Osaka said. “I was drawn to partner with Nissan because of its strong Japanese DNA and global competitive spirit. The brand is always challenging expectations, and I look forward to bringing its vision for driving excitement to new audiences around the world.”

As part of the partnership, Osaka will appear in global promotions and advertising for Nissan, and Nissan will support her activities as a tennis player, including providing Nissan vehicles at her tour destinations.

“With a combination of grit and grace, Naomi Osaka is not afraid to take on the best tennis players of our time, and win,” said Asako Hoshino, senior vice president at Nissan Motor Co., Ltd. “This is the same spirit of performance that Nissan has embodied throughout our history – exemplified most recently by the Nissan Leaf, which defied the odds to become the best-selling electric vehicle in the world. And just like Naomi, Nissan is just getting started.”
at 11:40 AM