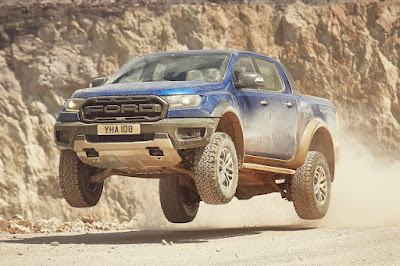 The 2019 Ranger comes in 9 variants, including the Ranger Raptor:

Ranger Raptor and the Wildtrak 4x4 are equipped with a new 2.0-liter Bi-Turbo diesel engine that delivers a maximum of 213 horsepower and 500 Nm of torque. The 2.0-liter Bi-Turbo takes advantage of sequential turbocharging to deliver greater responsiveness, drivability and maximum efficiency. A variable geometry turbocharger is employed to deliver greater throttle response and eliminate lag by spooling up quickly at low speeds. The second unit is a fixed geometry turbocharger with a high flow capacity to deliver maximum power and performance.

These two variants come with a Ford-designed and Ford-built 10-speed automatic transmission. They have been created with high-strength steel, aluminum alloy, and composites to optimize durability and weight.

The XLT and XLS variants, which now includes a Ranger 2.2L XLS 4x2 AT variant in the portfolio, are equipped with Ranger’s proven 2.2L TDCi engine, which offers 160 horsepower and 385 Nm of torque and comes with either a six-speed automatic or manual transmission.

The new Ranger’s suspension had been upgraded across the range to reduce and better control roll, with an emphasis on improving the driving experience when fully-laden and towing. The geometry changes bring an improved ride, a reduction in body roll as well as improved steering precision. Crucially, while improving the drive and refinement, the suspension changes do not impact on Ranger’s towing and payload capabilities.

The new Ranger also boasts of advanced smart and safe features for a more comfortable and convenient drive. The Autonomous Emergency Braking (AEB) feature helps mitigate risks by detecting pedestrians and vehicles, alerting drivers with an audible and visual warning. With the AEB, the new Ranger pre-charges brakes to increase brake-assist sensitivity providing full responsiveness when the driver brakes.

In a segment-first, the new Ranger’s easy-to-live-with features include Active Park Assist (APA), which helps the driver find parallel parking spaces and steers itself to a parking spot. All the driver needs to do is control the throttle and brake.

Also available on the new Ranger is the Adaptive Cruise Control (ACC) feature, which senses traffic and adjusts speed automatically. When traffic slows down, the new Ranger slows down too. As soon as traffic clears, the new Ranger returns to its preset speed. Meanwhile, the Lane Departure Warning feature vibrates the steering wheel if the driver unintentionally moves out of his/her lane at certain speed.

Loading is easier than ever on the XLT and Wildtrak variants with the introduction of a first-in-segment, Tailgate Lift Assist. With a new internal mechanism, the Ranger’s tailgate is now lighter to lift, with a 70 percent reduction in initial force required to raise it for closing. Not only does this system require less effort to lift, it also means that it’s easier to lower.

The Wildtrak variants also offer the Smart Keyless Entry and push-button start, as well as up to 6 airbags ensuring maximum convenience and safety. The new Ranger also offers the SYNC 3 feature compatible with Apple CarPlay and Android Auto, allowing drivers to make calls, select music, and use apps with eyes on the road and hands on the wheel.

Customers can also ride and experience the new Ranger and Ranger Raptor at the Ford Island Conquest Year 2 in Arca South, Taguig City on Saturday, September 22.
at 7:01 PM