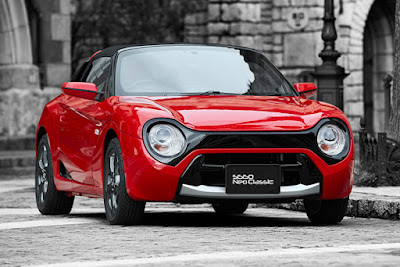 Honda produced a Japan-only funky two-seater sportscar dubbed the S660 in 2015. Considered to be the successor to the equally funky Beat, this baby-sized roadster confirms to Japan’s kei-car regulations. Of course, it had to look like Honda’s flagship sportscar, the NSX; that is, until now.

Three years later, Honda is now offering a body kit for the S660 that transform it into a retro-inspired roadster. Called the “S660 Neo Classic,” it swaps the angry shark-like styling for something that’s definitely cuter to the eye.

Calling up cues from the N-One kei car (where the S660 is based off) and the Honda Sports EV, the S660 Neo Classic has had both ends worked on. Up front, it gets big, round headlights a solid plastic grille, and reshaped hood, while at the back, the buttresses have been extended and the taillights swapped to round ones.

Honda says that the entire kit is made of fiberglass and doesn’t come painted from the factory. Naturally, it’s shocking to hear that the conversion kit will set you back around USD 11,500 or ~P 617,952.50! That’s certainly a huge pile of money for a body kit.