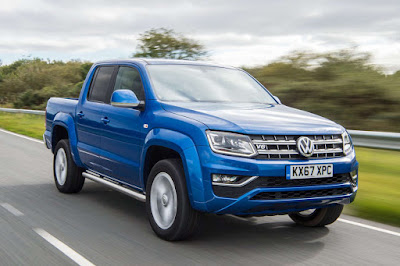 With their announcement that they’re pulling out of the passenger car market in the US, Ford is struggling to keep its investors happy. With no “clear progress on its turnaround plan,” Moody’s, the credit ratings company, recently cut the automaker’s bond status to one notch above “junk.”

Moody’s ratings represent how likely a company is to default on loans, and a downgrade can make securing money from investors difficult.

The downgrade comes at a time when Ford faces weakening profit margins in North America, a shrinking business in China, and losses in South America and Europe. There is an unlikely partner that could help Ford partially get out of this mess: Volkswagen.

A report from Automotive News says that the German automaker is exploring a strategic partnership with Ford. And despite Volkswagen being the larger automaker (it’s nearly twice the size of Ford), they’re looking at a partnership of equals. This is certainly an upgrade from the previously-announced joint development and production alliance in June.

The partnership could spawn the joint development and manufacture of light commercial vehicles, the first of which could be the second-generation Amarok.

With Mazda opting to co-develop its next-generation BT-50 with Isuzu, Volkswagen is looking to save development costs on a second-generation Amarok. First launched eight years ago, it competes with the Ford Ranger and sees a possible synergy there.

“Ford was a logical partner. Other companies are already in alliances, but now the two market leaders in Europe are joining forces,” Volkswagen Commercial Vehicles CEO Thomas Sedran said. “The product life cycles are a good match. We will build for them. They will build for us.”

Sedran also wouldn’t rule out any partnership in the passenger car business. For now though, both Ford and Volkswagen are “focused to get the LCV projects running.” He expects that the deal between Ford and Volkswagen will be signed by the end of the year.

At this point, Volkswagen is ruling out any sort of equity or cross-shareholding arrangement, something that besmirched the largest Anglo-American partnership: DaimlerChrysler. It must be remembered that from 1998 to 2007, Daimler-Benz and Chrysler entered to a “merger of equals” or “marriage made in heaven” only to suffer a tumultuous divorce due to cultural differences.

Source: Automotive News
at 8:39 AM