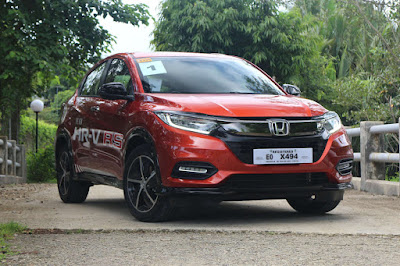 The HR-V has managed to play the in-between card very well. It appeals to buyers who don’t want a big, lumbering SUV or a compact sedan with a low seating position. Above all, it’s a sub-compact crossover in label alone. With its mix of funky styling, a capacious and flexible interior, and commendable real-world performance, it’s got the goods to help it punch well above its class.

Outside, the new HR-V continues to blend coupe and crossover design cues. Admittedly, that combination doesn’t sound promising, but in practice, it’s actually quite compelling; perhaps even more so than Honda’s next-tier SUV, the CR-V. For 2018, the entire front clip’s been changed giving it the signature Honda family look with the solid bar grille and LED headlights with L-shaped DRLs.

The headline though is the availability of a new variant which Honda calls “RS” or “Road Sailing.” Like how it was done with the Jazz, this one adds a bigger dose of individuality with its honeycomb grille, dark chrome door handles and door trims, and exclusive 17-inch alloy wheels. The aesthetic changes are capped off by the LED front fog lights, smoke LED taillights, and an exclusive color: Phoenix Orange.

The HR-V’s left-field interpretation of what a crossover should be continues inside with its high center console that clearly divides the two front seats. This individuality is emphasized further with the floating cylindrical gauges and aircraft-inspired stubby gearlever. Some of the pluckiness remains like the gauge ring that changes color randomly upon startup and the trio of slim air vents in front of the passenger, but some, like the glowing speaker grille is gone. Overall, it still exhibits excellent fit and finish, thanks largely to the large expanse of soft-touch materials on the dashboard itself; increasing only more with the RS because of the leather seats.

In as much as it’s fresh and modern, it’s actually quite interesting though how the infotainment system has actually taken a step back with this update. It’s got Apple CarPlay now and the graphics are crisp, but the interface is less than intuitive. But the biggest culprit is the way the hands-free mic pokes out of the ceiling—it looks too much like an afterthought.

Ergonomically, it continues to be a solid choice with excellent visibility on all fronts, and controls which are all easily located and controlled. What’s great though is that Honda’s managed to address the HR-V’s largest weakness: the seats. For this update, the front seats have a different construction with increased shoulder and thigh support. Towards the back, the rear seats still continue to be the best in this class with enough legroom to accommodate a couple of basketball players.

Destined more for the city dweller, the HR-V remains an amiable long-distance tourer. It’s mechanically unchanged and that means having a 1.8-liter SOHC i-VTEC engine under the hood. The output: 141 horsepower and 172 Nm of torque sound reasonable, and frankly, it is. Aided by an Earth Dreams CVT with a low-speed torque converter (now with cruise control), it’s quick and responsive around town. However, as with any small displacement engine, once the driving turns more spirited, it will require some wringing. Thankfully, work has been done to improve the quietness. As a result, the constant whirring and buzzing from the CVT has been eliminated from inside the cabin.

While the HR-V lacks the pokiness expected of its coupe/crossover fusion, at least it offers a sporty and confident drive. There’s a good amount of precision baked into the steering and in turn, this makes it feel obedient and stable through corners. Admittedly, in the most extreme cases, the front wheels can momentarily break traction (it’s purely a front-driver), but at least the Vehicle Stability Assist (VSA) kicks in immediately to keep things in check. Riding comfort also remains a bright point. Whether its small undulations or meteor-sized potholes, it can take them in stride.

When Honda reintroduced the HR-V nameplate back in 2015, they’ve also managed to open up a new market. Despite pricing itself above the sub-compact crossover crowd, its focus on style, build quality, and interior flexibility means they’ve managed to capture the more sophisticated set. With the 2018 update, they’ve managed to pepper in enough changes to keep things interesting. A reduction in variants means that there’s only two to choose from: the 1.8 E at P 1,295,000 and the 1.8 RS Navi at P 1,495,000. Either way, it remains a well-rounded crossover that offers both individuality and engineering in equal measure.