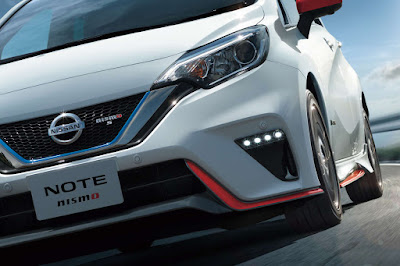 Continuing Nissan’s move to “NISMO everything,” the Japanese carmaker launched the Note e-POWER NISMO S for the Japanese market. This time, aside from aesthetics and handling improvements expected from the NISMO badge, they have finally eked out an additional 25 percent more power and torque compared to the regular Note e-POWER NISMO.

Added power aside, the Note e-POWER NISMO S gets a tweaked electric power steering system and suspension. The structural elements—front and rear cross bars, tunnel stay, and the like have been strengthened as are the front stabilizers.

Like the Note e-POWER NISMO, the NISMO S variant gets the usual sporty visual treatment with its custom front bumper, larger tailpipe diameter, and various red highlights. Inside, it’s got unique gauges, and suede sport seats.

e-POWER—an electric powertrain connected to a gasoline generator—has been instrumental in making the Note the best-selling car in Japan. Currently, it’s the most registered vehicle there for the first 6 months of the year. Though the technology is currently limited to Japanese models, Nissan has publicly stated that they’re studying to bring this technology to export markets, including the Philippines.

Nissan sees e-POWER as a way for them to achieve their ambitious target of selling 1 million electrified vehicles annually by 2022.
at 9:11 AM