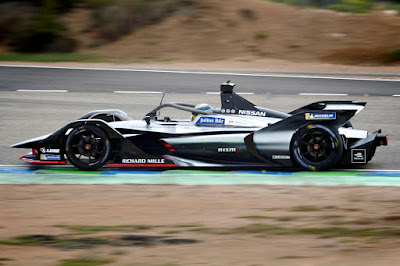 Nissan isn’t taking any chances when it comes to their Formula E debut. Instead of developing a team from scratch, they’ve opted instead to purchase a stake in the e.dams racing team—the team that has won the Team Championship in the first three seasons of Formula E.

As the first Japanese carmaker to participate in Formula E, Nissan is cementing their reputation as a global leader in electric vehicles. With more than 350,000 Nissan Leaf EVs sold, the carmaker hopes that the Formula E program will show a new “performance side to Nissan Intelligent Mobility.”

Based in Le Mans, France, and co-founded by team principal Jean-Paul Driot, the e.dams organization emerged from DAMS, a leading contender in European open-wheel and sports car competition for more than 30 years. In its previous partnership with Nissan’s alliance partner Renault, e.dams won the Team Championship in the first three seasons of Formula E. It also holds records for most wins and pole positions.

“For Nissan’s first Formula E experience, it makes sense to partner with e.dams and be able to draw on the organization’s experience of winning races and championships,” said Roel de Vries, Nissan corporate vice president and global head of marketing and brand strategy. “The level of competition in Formula E will get even more intense for season five, with a series-mandated all-new car and powertrain. As part of our commitment to our partnership, Nissan has now purchased an ownership stake in the organization, and we’re excited to work with Jean-Paul and his team.”

Said Driot: “With our new partner Nissan, we’re eagerly awaiting the new challenges ahead. We’re very proud of our history in Formula E, and we’re looking forward to adding new pages to the series’ history books with our new partner and the new car.”

Nissan and e.dams have begun testing the all-new “Gen2” Formula E car, which provides more power and range and eliminates the need for the midrace car swap that was a feature of Formula E during the first four seasons.
at 2:08 PM