The P 6.21-million "Urban Pack" is the Most Popular Land Rover Defender 110 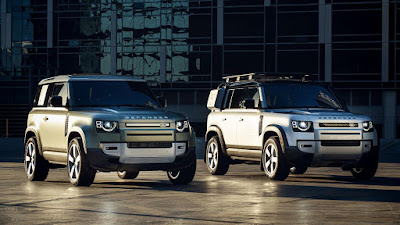 Order books are now open for the three-door Land Rover Defender 90 following the successful launch of the five-door Defender 110.

Since its world premiere at the Frankfurt Motor Show in September 2019, there has been an unprecedented demand for the luxury off-roader. More than 1.21 million people have configured a Defender on the official Land Rover website, with over half choosing one of the four Accessory Packs.

The introduction of the Accessory Pack makes the all-new Defender the most accessorized and personalized vehicle Land Rover has ever produced. Statistically, the Urban Pack—with its front undershield, bright rear scuff plate, metal pedals, and a spare tire cover has been the most popular choice, selected in more than 35 percent of those who wanted an Accessory Pack. Followed by the Explorer Pack.

Now that order books for the Defender 90 have been opened, Land Rover says interest is sure to grow even more.

The Front Row Center Seat aka jump seat allows three people to travel in the front row. Conceived and designed as an occasional seat, the practical addition means the Defender 90 can accommodate six occupants in a size no bigger than a compact family hatchback. When not in use, the seatback folds down to provide a front armrest and oddment storage, including a pair of additional cupholders.

The addition of the three-door model aside, the Defender family will grow even more later this year as an efficient plug-in hybrid (PHEV) variant and even commercial derivatives come into the mix as well.