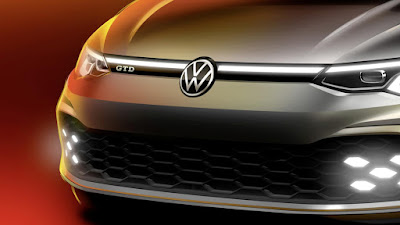 The demise of diesel has been greatly exaggerated. Despite investing a large chunk of its product development on electric vehicles, Volkswagen has also announced that its eight-generation Golf is still getting a high-performance diesel. The Golf GTD will make its official global debut this March.

The Golf GTD is said to have Volkswagen’s cleanest diesel yet thanks to its twin-dosing Selective Catalytic Reduction (SCR) and double AdBlue exhaust treatment. VW hasn’t released any official power figures yet, but it’s said to have more power and torque than its predecessor. The previous Golf GTD had 181 horsepower and 380 Nm of torque and was mated to either a 6-speed manual or dual clutch (DSG) gearbox.

More than just sheer grunt, the Golf GTD will exhibit the “same dynamic concept” as the Golf GTI Mk 1 and promises to have improved responsiveness over the previous Golf GTD. It’s also said to be more economical and cleaner than ever.
at 4:00 AM