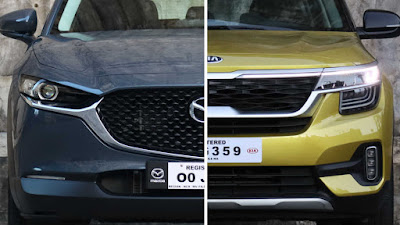 Subcompact crossovers are all the rage these days, and remarkably, it’s a segment that seems to find never ending niches. One of the most visible signs of this segmentation at work is through price—with subcompact crossovers costing anywhere from less than a million pesos to several million pesos. But what happens when segments meet—like the union in a Venn diagram? Things are bound to get interesting.

When Kia introduced the Seltos locally, they sought to compete in both low- and high-end segments using just one basic vehicle. It’s an interesting approach to say the least, and one that puts their new subcompact crossover somewhere between the deluge of Chinese brands (for the lower variants), and plusher offerings (for the highest variant), like this one, the Mazda CX-30. In Mazda’s case, they’ve opted to forego going affordable, and instead, opted to set their sights on the higher-end market. Their opposing market strategy is why the top-trim P 1.505-million Kia Seltos 2.0 SX can actually go against the P 1.490-million Mazda CX-30 Pro. The question is, which subcompact crossover ends up on top.

To be fair, both of these crossovers are easy on the eye. Representative of their respective brand’s newest design language, they fit right into any chic or cosmopolitan setting. In short, you won’t be embarrassed if people see you alighting from either one at the country club. What is unique though is how Kia and Mazda approached their design.

On one hand, there’s this Starbright Yellow Kia Seltos—bold, brash, and maybe for the older set, on the verge of being over styled. Peter Schreyer and his team worked to give it a younger, K-pop generation persona, and this is immediately seen in the two-tone roof, LED lights that reach the front grille, and roof rails which look more ornamental than functional. It’s fitting for the Black Pink generation—and this is clearly one lady that doesn’t go out of the house without looking all glammed up.

On the other, there’s the Mazda CX-30. Compared to the Seltos, this one’s more for Ginza high fashion than Gangnam Street fashion. It’s refined, elegant, and even in its iconic new shade, Polymetal Gray, quite understated. Surprisingly though, it turns heads as much as the Kia. If the Seltos were Black Pink, the CX-30 would be Catriona Gray during No Make Up Monday. And while its inner beauty radiates, Mazda’s decision to put in bulb-type DRLs when the rest of the lighting package is composed of LEDs, is odd.

While exterior look is down to personal preference—do you prefer your women glammed up or dressed down—when it comes to the interior, there’s no doubting that the CX-30 takes the commanding lead here. Kia might have done well to add some character to the Seltos’s cabin, but it’s let down by its hard, scratchy plastics. Moreover, the sheer amount of blank button covers is a constant reminder that even in this 2.0 SX spec, lots of features didn’t make it locally. Meanwhile, designed to compete with more premium market choices, the CX-30, even in this basic Pro trim outshines the Kia. It loses all the tasty chrome and high-gloss bits; but poke around, and all that soft-touch goodness is still around. Even the steering wheel, finished in urethane, and the seats, covered in fabric are all well-made. Bonus points too for the refreshing two-tone black and blue treatment and the rear center armrest which isn’t present in the Seltos.

As tall-riding hatchbacks go (that’s what crossovers are basically), these two are expected to give a certain level of utility to their owner. With that in mind, the Seltos turns the tables on the CX-30. It’s far and away the roomier of two, especially when it comes to the backseats. The lower belt line too make it feel less claustrophobic while improving visibility at the three-quarters rear. Oh, and the fact that the rear seats offer adjustable inclination makes the Seltos much more apt for family use. Now, if they would only redesign the rear speaker grilles as not to chafe the knee, that would make it perfect.

Conversely, the CX-30 is decided more personal. Upfront, there’s absolutely no problem. The dashboard gives off a snug, cockpit-like feel for the driver (which is always good), but at there’s a severe lack of knee room at the back (which is always bad). Moreover, with the rear seats up, the cargo space measures at 317 liters—smaller than even the Mazda3 (the Seltos stands at 433 liters). This brings up a frequently used adage when it comes to Mazdas: where did all that wheelbase go? Nonetheless, the CX-30, at least has a cargo cover which the Seltos doesn’t have. Oh, and it wins too when it comes to ergonomics and driver comfort.

The mechanical ingredients of the Seltos and the CX-30 are remarkably the same: a normally-aspirated 2.0-liter motor mated to an automatic transmission driving the front wheels. They differ greatly though in their execution.

The target, for Kia, it seems is the middle ground—people who’re really unsure of whether they want performance or economy. As a result, it’s a crossover that does a bit of both. With 149-horsepower and 179 Nm of torque at its disposal, its 2.0-liter reads as underpowered on paper. Still, it makes the most out of it with its trick IVT transmission. Basically, a CVT with a built-in shift logic, it makes the Seltos feel responsive be it city or highway speeds. Moreover, it’s quite economical at 9 km/L at 15 km/h, and 14.28 km/L at 36 km/h.

By comparison, the CX-30 goes straight for the enthusiastic set. While the CX-30 is already great to drive, thanks to the Pro’s smaller wheels, there’s less rotating mass for the 155-horsepower, 200 Nm of torque engine to overcome. In short, among the three available variants, this by far, is the most agile one. Steering is great, but believe it or not, the Mazda doesn’t feel as quick on its feet at low or moderate speeds. The ride’s decidedly firmer too. Moreover, the Kia’s perceived floatiness isn’t such a bad thing, specially to the “regular” crossover. At speed, the tables are turned, and the CX-30 comes alive. Not only is it more obedient, but it’s the one that turns any grimace into a smile. Plus, on the highway, it’s way quieter than the Seltos. As fun as it is though, its vaunted Skyactiv-G engine merely matches Seltos’s fuel economy in the city, registering the same 9 km/L (average 15 km/h); it does, however, perform better at higher speeds: 15.87 km/L (average 36 km/h).

This is actually the most interesting part. With just a P 15,000 price gap, favoring the CX-30, it’s quite amazing to see how the top-trim Selos 2.0 SX somewhat matches the base CX-30 Pro in major features. Drivetrain aside, both have LED headlights, smart keyless entry with push-button start/stop, automatic headlights, and a fairly advanced infotainment system with Apple CarPlay and Android Auto. Both also offer the same level of safety equipment—6 SRS airbags, ABS with EBD, stability control, and a rear backup camera. The Seltos lodges a punch with LED DRLs, larger wheels, leather steering wheel, part-leatherette seats, lit-vanity mirrors, cruise control, and automatic climate control. Meanwhile, the CX-30 counterpunches (albeit not as convincingly) with rain-sensing wipers, an electronic parking brake with auto hold, a rear center armrest, and a rear cargo cover. Overall, it’s a win-some-lose-some scenario. The CX-30’s superior fit and finish aside, if everything were based on spec, the Seltos ekes out a win.

With the continued sub-segmentation of the sub-compact crossover segment, in the end, it’s the buyer that ends up spoilt for choices. You can’t go wrong with either the Kia Seltos or the Mazda CX-30—both are worthy of your consideration, and both offer their own respective strengths in an increasingly crowded field. The Seltos is for those who’re mind over heart. It’s the more practical of the two, with slightly better fuel economy, larger interior room, and a nudge better equipment level. On the other hand, the CX-30 is for those who’re seeking an emotional, rather than rational choice. It’s not exactly the most practical in terms of interior room or cargo size, but it makes up for it with its stellar on-road character and unparalleled refinement.

After all’s said and done though, it’s the Seltos that wins here. As an enthusiast, it’s easy to pick the CX-30 not just because it looks beautifully elegant, but because it’s also well-crafted as well. However, it’s the Seltos that appeals to larger demographic—those who want practically just as much as style; comfort just as much as sportiness. Mazda put up a good fight there, and the results would have been different if they just added a bit more in terms of equipment level. As it stands though, because it successfully treads the middle ground well, it’s the Kia that wins here.