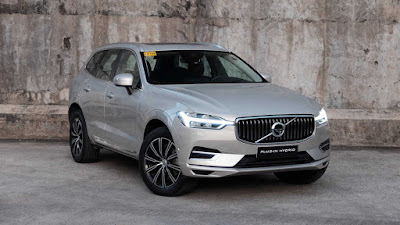 There’s a lot to love about Volvo recently. From barely surviving in Ford’s corporate shadow, they’ve now entered a new era of renaissance—one where they’ve managed to come up with winner after winner. While the brand has a compelling range of vehicles, at the core of all this is the XC60. It’s globally their best-selling model, and single-handedly a showcase of what they’ve accomplished thus far.

Thus, it’s only fitting for Volvo Philippines to offer the XC60 with the brand’s plug-in hybrid electric drive. Sitting atop the range, this “Twin Engine” in Volvo speak, marries a 2.0-liter super- and turbocharged 4-cylinder engine mounted upfront with an electric motor at the back. The result? An unbeatable blend of luxury and performance that’s also extremely comfortable and efficient (provided you have a compatible house plug).

From the outside, it’s hard to see what makes this particular XC60 special. With the exception of the charging port on the driver’s side front fender, requisite T8 badging at the back, and wheels an incher larger, it can be mistaken for the more conventional XC60 which Volvo Philippines also sells. Opting not to shout out its green credentials falls right into its Scandinavian character. It’s all about quiet, refined luxury; never ostentatious or pretentious.

Open the door, peer inside, and the same adjectives apply. The cabin isn’t shouty, but is beautifully laid out. Slide behind the wheel, and the Volvo tagline of, “designed around you” becomes more obvious. The front seats are supremely comfortable—wide, supportive, and offers all sorts of adjustment, including one that extends the cushions for longer limbed individuals. There’s plenty of leg and headroom too, whether it’s on the first or second rows. And in typical Volvo fashion, there’s even a clever child booster built into the second row’s outboard seats. Despite the added electric motor and battery, the cargo hold is still a respectable 468 liters—it’s down versus its main competitors, but the rear seats can be folded down in a 60/40 split.

While traditional luxury materials like leather, sustainable driftwood inlays, and metallic accents make their way inside, by far, the take here is decidedly more high-tech. Central to all this is a 9-inch portrait-oriented infotainment screen. It’s a bit smaller in size compared to the one installed in the 90 Series models, but it’s no less featured. Apple CarPlay and Android Auto are standard, as is offline GPS navigation (with info on local pedestrian crosswalks to boot). Unfortunately, this setup exposes two weaknesses. First, the screen is responsive, but a magnet for fingerprint smudges. Second, the physical audio knob, while easy-to-reach, feels cheap. Also, curiously, for those who stay up-to-date with news via AM radio, the XC60 doesn’t come equipped with it. For everyone else though, the 19-speaker Bowers and Wilkins sound system simply rocks.

Replacing the traditional analog gauges is a 12.3-inch screen. It’s configurable to some extent, and is easy enough to understand. With all digital gauges, a large touchscreen infotainment screen, and drive-by-wire gearlever, it’s peculiar that starting the XC60 isn’t a push-button affair. Instead, starting it requires twisting a knob located near the gear lever’s. It’s a nice touch that promises a personal and direct connection between car and driver.

Sadly, this connection doesn’t fully materialize. Problems start when the Orrefors Crystal gear lever is used. The entire experience is unintuitive. For instance, to go into reverse, the lever is tapped forward twice; to go back to drive, it’s two taps back. It requires some vigilance and a glance at the instrument cluster to make sure the right gear’s selected.

This continues with how Volvo’s tuned the drive. It prefers to deliver a cocooning experience—one where it isolates its occupants (driver included) from the hustle-and-bustle of the outside world. Whereas its competitors promise on delivering razor-sharp handling, the XC60 does the opposite. With that, it’s extremely pliant even over the roughest of Manila’s roads. In and around town, it’s cushy and comfortable with almost nothing upsetting the ride. This sense of isolation is heightened by the fact that it can run completely on electric power, but even if the gasoline engine switches on, the noise level goes up just a tad. The brakes too aren’t as inspiring. Because they integrate energy regeneration, the pedal feel is inconsistent.

On the subject of the powertrain, this is single-handedly the biggest and greatest differentiator of the XC60 T8 Twin Engine over its competitors. Upfront, there’s a 303-horsepower, 400 Nm engine mated to the front axle, while at the back, an 88-horsepower, 240 Nm of torque electric motor driving the rear axle. Combined, it makes 390 horsepower and 640 Nm of torque. The part fueled by liquid fossils is managed by an 8-speed automatic which can also decouple itself completely letting this SUV run on pure electric power thanks to a 11.4 kWh battery.

On paper, the performance sounds explosive, and to some degree it is, but it doesn’t impart a great deal of emotion. Part of the issue has to do with the XC60’s curb weight—all 2,103 kilograms of it, but the bigger issue goes back to Volvo’s deliberate direction to neuter the visceral rawness. Having said that, stomp on the throttle, and there’s never any lack of grunt.

Provided the right kind of power socket’s installed, the XC60’s battery can be topped up in as little as 3 hours (20-amps) or as much as 8 hours (6-amps). Volvo says its pure electric range is between 47 to 54 kilometers. Theoretically, this means the gasoline engine never needs to turn on, except perhaps on long road trips. However, in reality, that electric-only range is unachievable. Due to Manila’s snarling traffic, this electric range goes down to just 20 kilometers. Still, it’s enough for a one-way trip from Makati to Marikina. Even with the battery completely depleted, the XC60 can shift to becoming a more conventional gasoline-electric hybrid. Sadly, it’s not as optimized in this mode as fuel efficiency drops to just 12.5 km/L.

Priced at P 5,795,000, the XC60 T8 Twin Engine is more expensive than the Audi Q5, BMW X3, or Mercedes-Benz GLC. Of course, as the range-topping variant in the XC60 range, it’s better equipped than its peers and offers good bang-for-buck performance. While it’s edged out in terms of outright sportiness, it does deliver unparalleled comfort and does so in stunning and unbeatable fashion. Moreover, it has a technological edge that not only helps it balance power and economy, but also gives it an experience that’s much more relatable to the premium buyer. Despite its weaknesses, the XC60 is an original and refreshing take in a segment known for all that German monotony and sternness.