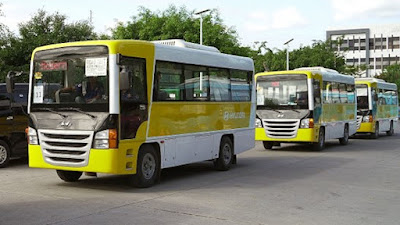 Hyundai Asia Resources, Inc. (HARI), continues its support for the country’s PUV Modernization Program with the turn over of the first batch of Hyundai HD50S Class 2 Modern PUVs to the Public Transport Alliance of Gensan (PTAG), led by PTAG President Robert N. Cang. 15 out of the 326 units orderered by PTAG were turned over.

In his speech, DOTr Asec. Pastor expressed confidence that the government program is gaining traction as operators, drivers, and commuters alike are realizing the economic, social, and environmental benefits of modernizing the local public transport system.

The event also saw strong support from the local government with the presence of General Santos City Mayor Ronnel Rivera who hailed the progress of PUVMP in his city; while LTFRB Chairman Delgra expressed hope that the program would reach the farthest corners of the country.

The Hyundai Class 2 Modern Jeepney is built on Hyundai’s HD50S platform and is powered by a 2.9-liter Euro 4-compliant CRDi engine that provides better fuel efficiency, reliability, and cleaner emissions. It is designed for enhanced stability and power-to-weight ratio, boasting a 3,415-millimeter wheelbase.

Both units have figured prominently in numerous PUV caravans in 2019 and were granted their DOTr Certificate of Compliance (COC), signaling that they are ready for deployment across the country.
at 2:00 AM