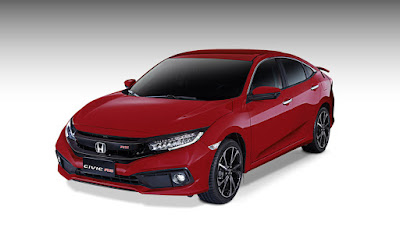 Fans of the Rallye Red color on the Honda Civic RS Turbo, here’s some bad news for you. Honda Cars Philippines is phasing this bright, sporty hue out. The good news? Here is a more formal, darker shade called Ignite Red Metallic.

This new shade, exclusive to the Civic RS Turbo replaces Rallye Red. If the color seems familiar, it debuted first on the all-new City as an exclusive color on the first-ever City RS variant. While this may be a small, running change to Honda’s compact sedan, this rationalization of available colors may be the first sign that the all-new City is almost upon us.

Aside from Ignite Red Metallic, the Civic RS Turbo also gets Cosmic Blue Metallic and Modern Steel Metallic. They also have Platinum White Pearl which adds P 20,000 on the sticker price.

Sadly, this is the only new thing on the Civic RS Turbo. If you were hoping for some Honda Sensing love, you are out of luck. But hey, at the very least Honda’s kept the price of this top-tier Civic to P 1,608,000—the very same price it had last year.
at 11:16 AM