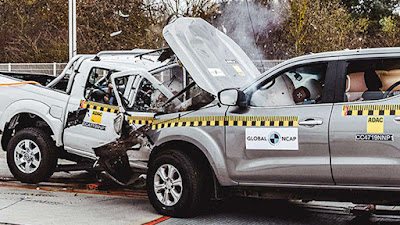 The Global New Car Assessment Program or Global NCAP is highlighting the double standards by which car manufacturers operate depending on region requirement, particularly in the area of safety.

In the first test of its kind, the Global NCAP crash-tested a 2019 Nissan NP300 Hardbody (basically the D22 series still being sold as new in Africa) against a second-hand Nissan Navara NP300 (D23) manufactured in Europe in 2015.

The difference in safety performance between the new African model and the second-hand European version is a matter of life and death. It proves that going brand-new isn’t necessarily safe.

The crash test driver dummy in the new African Nissan would have likely sustained fatal injuries, the driver of the equivalent second-hand European model would have likely walked away from the crash. The second-hand European car is fitted with the life-saving crash avoidance anti-skid system, Electronic Stability Control (ESC), the new African version is not.

The demonstration coincides with the Global NCAP’s call to action to half road deaths and serious injuries by 2023 worldwide.

Unfortunately, not all automakers are heeding this call.

Maruti Suzuki has announced that they will no longer submit their vehicles for evaluation by the Global NCAP.

Citing the Global NCAP test as being optional, Suzuki’s joint-venture in India (also the Philippines’s source of vehicles such as the Alto and the upcoming S-presso mini SUV) says that they will instead focus on meeting Indian government regulations such as the Bharat New Vehicle Safety Assessment Program (BNVSAP).

That said, the BNVSAP requirements are more rudimentary than their Global counterpart. Under the BNVSAP, vehicles sold in India require just a driver’s airbag, ABS with EBD, rear parking sensors, and front seat belt minders as standard equipment. Furthermore, while Global NCAP tests their cars at an average speed of 64 km/h, the Indian test sets it at a lower 56 km/h.