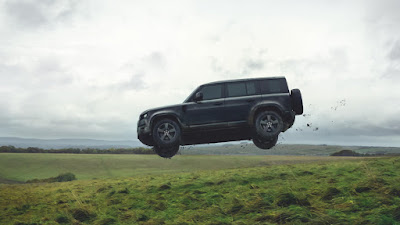 The all-new Land Rover Defender will be pushed to its limits in the new James Bond film, No Time To Die.

The new Bond film uses the first few Defenders to roll off Land Rover’s Nitra factory in Slovakia. They’re based on the Defender 110X model in Santorini Black and fitted with darkened skid plates, 20-inch dark finished rims, and special off-road tires. For its stunt work, they are stock Defenders with the exception of a safety roll cage put in.

The first few photos showed the all-new five-door Defender doing its own stunts including being launched into the air. Throughout filming, it was put to further extreme tests as the vehicles were driven at top speeds through swamps and rivers.

The film will be released in Philippines theaters this April 2020.
at 1:38 PM