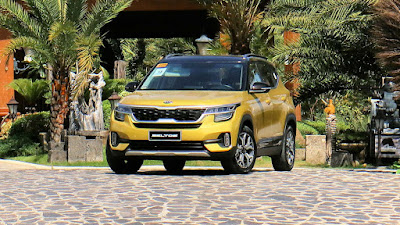 With Director Bong Joon-ho and his movie, Parasite winning big at the Academy Awards, it’s yet another visible sign that Korea’s ready for the limelight. Their successful invasion of global popular culture, from gadgets to music to food, and now, to movies has left an indelible mark in the way people think and act. Selling 324 units in two months, the Kia Seltos could very well be that invasive force in the crossover segment.

Boxy and squarish, the Seltos wears its uniqueness on its sleeve. It’s stylish and contemporary, just like other models from Kia’s stable; only in this case, things have been cranked up to 11. The playful details from the large headlights to the grille to the roof rails all feel exaggerated, and even needlessly ornamental in some way, but taken as a whole, works well to give it head-turning looks.

Also working in its favor is its size. Though classified as a sub-compact SUV, in reality it sits somewhere between the Hyundai Kona (which it shares its platform) and the Kia Sportage allowing designs a bigger canvas to work with.

Sadly, that futuristic, exaggerated vision of the future doesn’t quite extend to the Seltos’s interior. There are some playful elements like the center-tunnel-mounted grab handle and the geometric speaker cover, but overall, it reverts back to Corporate Kia, down to some disappointingly hard plastics on the dashboard and door panels. Nonetheless, at least its straightforwardness means it’s easy to understand. Ergonomically, it’s well-polished with the chunky steering wheel, nicely-bolstered seats, and controls positioned where you’d expect to find them.

Now, normally sub-compact crossovers prioritize front seat comfort over everything else, but the Seltos takes a different approach. It offers more head-, shoulder, and leg room in both first and second rows compared to even the Honda HR-V—a crossover that’s generally considered large for its size. More than that, they’ve managed to sculpt the rear seats as not to overly punish the person sitting in the middle. Plus, the rear seats offer adjustable recline (from 26 to 32 degrees), too. If only they’d throw in a center armrest at the back, then it’d be complete.

Given Kia’s emphasis on connectivity, the Seltos’s infotainment system is sublime. The 8-inch screen size alone is generous, but more than that, it scores high in functionality and usability as well. Not only does it work even directly sunlight (take note, Honda), but it’s the first in the segment that allows two devices to pair via Bluetooth simultaneously. This means, the driver can use his mobile phone’s hands-free feature, while the passenger can listen to his music playlist on a different mobile device. Apple CarPlay and Android Auto are standard as well.

All variants of the local Seltos line-up come with just one engine choice: a 2.0-liter 4-cylinder engine generating 149 horsepower and 179 Nm of torque. If these power figures seem low for its displacement, it’s because it uses an Atkinson cycle. This special engine, where the intake valve is held open longer than in a conventional Otto cycle, improves fuel efficiency at the expense of outright power. True enough, it does a combined city/highway figure of 13.5 km/L.

Still, it’s a smooth motor that feels peppy off the line and reasonably fluid at slow to medium speeds. At higher speeds, the engine tends to become more vocal, but remains refined nonetheless. Near the shifter, there’s a rotary knob for selectable driving modes, but given the hectic pace of this drive, there wasn’t enough time to fiddle with it. Kept at Normal, it was well-balanced.

Coupled with the engine is what Kia calls, Intelligent Variable Transmission or IVT. Now, it’s hard to be fond of CVTs because of their rubbery, noisy, and artificial characteristics, but the one in the Seltos behaves rather well. Thanks to a chain-link-type belt and an adaptive shift logic, it mimics a conventional automatic transmission with none of the drawbacks.

Overall, the Seltos handles well too. It doesn’t fully make an emotional connection with the driver, but it’s actually nimble and a bit of fun to toss around. With a 5.3-meter turning radius, it turns on a dime, but weighs up nicely at speed. It fends off body roll effectively, and can take a switchback with a bit of gusto. Even better, it rides well on a multitude of road surfaces. On really rough roads, it does tend to lose some sense of refinement, but at least the damping is good enough to quell some nasty bumps.

It’s hard to imagine the world needing another sub-compact SUV to choose from right now, but competition breeds quality, and this has certainly helped Kia bring its A-game with the Seltos. Whether it can sustain its early success is yet to be seen, but the ingredients are there. The party may have already started a couple of years ago, but hot on the heels of a revitalized Philippine distributor, Kia’s finally got a model that knows how to boogie.