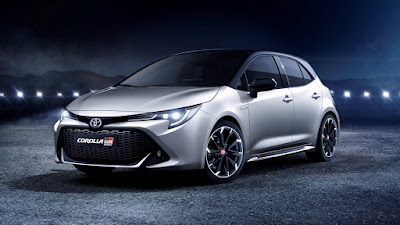 After releasing the 272-horsepower GR Yaris to the world, Toyota is looking to expand its family of go-fast cars. The likely candidate? The Corolla.

The first bit of news comes from a Tweet by Toyota USA (see photo below). In it, they’ve revealed that while U.S. won’t be getting the GR Yaris, they’ll have a “hot hatch to call its own.” Now, given that there are only two hatchback models available in the U.S.—the Yaris (a re-badged Mazda2) and the Corolla, the money’s on Toyota building a hot hatch based on their compact model. 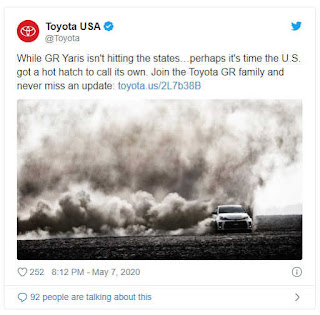 Further fanning the flame is the fact that Toyota’s moved to trademark the name, “GR Corolla.” Now, while the move may just be precautionary—to protect their IPs and all, but Gazoo Racing Chief Designer Toshio Kanei did confirm that high-performance version of the Corolla is in the works (he mentioned this during the launch of the Corolla GR Sport’s launch in Geneva last year).

Now, purists will be glad to know that Kanei-san also said that the GR Corolla will likely rely on the GR Yaris’s powertrain. With that, it’ll get a 1.6-liter turbocharged 3-cylinder making 272 horsepower and 370 Nm of torque. Furthermore, it’ll likely get the GR-FOUR all-wheel drive system as well which can vary power delivery between front and rear wheels using a multi-plate clutch. Putting all these tidbits together, and it seems that Toyota’s aiming squarely for the same segment occupied by the likes of the Subaru WRX and the Volkswagen Golf GTI.

While most see a market release date of 2023 (part of the current-generation Corolla’s swansong), Kanei-san did say that thanks to the Toyota New Global Architecture (TNGA), development time is relatively short. This means that Toyota may actually find a way to fast forward the development of the GR Corolla for a potential 2022 or even 2021 release date.
at 11:34 AM