Is the P 567k Geely Binrui Coming to the Philippines? 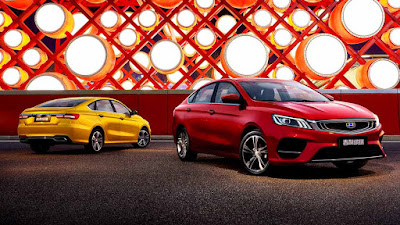 A quick look at Geely Philippines’s official website reveals that aside from the Coolray crossover and the Azkarra SUV, the Chinese car brand is looking to add at least three more cars to its line-up (see photo below). Based on their silhouette, the additions could be another SUV, an MPV, and a sedan. While the recently-launched 7-seater Haoyue seems like a no-brainer, what about the other two?

Like any other carmaker, Sojitz G Auto Philippines, Geely’s official distributor in the country, has been tightlipped when it comes to their future model plans. Having said that, a clue seems to have surfaced with the help of Geely Global.

The info provided by Geely actually talks about its monthly sales, particularly how they’ve registered total global sales of 105,468 units—a 44 percent month-on-month growth compared to March. But things get interesting when it comes to a quote given by Geely Auto’s President, An Conghui:

“Our overseas markets will also see the launch of Geely’s latest products such as the sporty Coolray SUV and Binrui sedan. We are confident in Geely’s performance for May and the second quarter.”

With that, it can be pretty much surmised that the Binrui is the mystery sedan on the Geely Philippines website.

For the curious, the Binrui is a compact sedan built atop the same BMA platform as the Coolray. Designed also for the “young and fashionable,” the Binrui adopts a rather peculiar design language: “The Aesthetics of Racing through Space and Time.” And while it does sound a bit Chinglish, what’s certain is that it takes on a fastback look, similar to the MG 6. Inside, the Binrui is styled similarly to other Geely models with the all-digital gauge cluster, large infotainment touchscreen, and flat-bottomed steering wheel.

Under the hood is where the Binrui gets interesting. It uses an all-turbo powertrain line-up, either in a 1.4- or 1.0-liter configuration. The lower trims are the ones that get the larger displacement engine with 133 horsepower and 215 Nm of torque—numbers not far off the Volkswagen Lavida which sports a similar engine configuration. This is mated to a 6-speed manual or a CVT. Meanwhile, the upper trim models get a 1.0-liter 3-cylinder which reduces peak torque to 205 Nm, but adds 3 additional horsepower. In this set-up, the choices are a 6-speed manual or a 6-speed dual clutch.

Being part of the BMA platform, the Binrui can be speced with all sorts of driver assist technology right off the bat including the brand’s Level 2 autonomous driving suite that combines lane departure warning/assist, intelligent cruise control, and automatic speed limit identification.