Toyota's Making a Hotted Up Corolla Called the Corolla GRMN 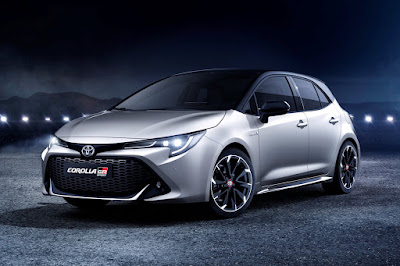 Toyota is dead serious about sportifying its line-up that even before the Corolla GR Sport’s had the time to be in the spotlight at the upcoming Geneva Motor Show, the Japanese carmaker has already confirmed that an even hotter version, the Corolla GRMN is in the works.

Supposedly a combination of the Japanese word, “gazo” or image and the English word, “garage,” Toyota has now been unifying its motorsports efforts under the “Gazoo Racing” umbrella. Not only that, it’s also begun to tweak and engineer road cars to make them more fun-to-drive (waku-doki, yay).

Within Gazoo Racing’s road cars, there’s actually a hierarchy that signifies just how hardcore it is. There are “GR Sport” models which are meant to be “extraordinarily flamboyant” (aka they’re basically body kit specials), “GR” which are authentic sport models that “extend the pure joy of driving to everyday life,” and, at the top of the food chain, “GRMN,” limited edition models which represents the pinnacle of what Gazoo Racing does. Oh, and in case you wanted to know, GRMN means “Gazoo Racing Meisters of Nurburgring.” 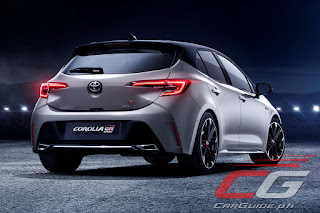 Moving on, for the Geneva Motor Show, Toyota is showing off the Corolla GR Sport—a sportier variant of Toyota’s compact hatchback (at least in Europe) that adds some nifty racy touches. This includes a new front grille with dark chrome, unique lower skirts, side rockers, and rear diffuser. This model also adds 18-inch machined alloy wheels, LED headlights, and a unique exterior color: Dynamic Gray with a bi-tone execution. Inside, it gets sportier seats finished in black fabric with leather-like bolsters, and black-and-red stitching on the instrument panel, steering wheel, and shifter.

However, since this is a GR Sport model, the Corolla GR Sport maintains the same 1.8-liter or 2.0-liter engine options, which are also available in other non-GR Sport variants.

Don’t fret though, because Gazoo Racing’s Chief Designer, Toshio Kanei confirmed that there’s a full-blown Corolla GRMN in the works. Though it’s still in the planning stage, Kanei-san says it’ll likely be powered by a 1.6-liter turbocharged engine. He did say that “the development time is relatively short because the TNGA or the Toyota New Global Architecture forms an excellent basis.”

If this all holds true, it doesn’t look like Toyota’s going as drastic as Honda did with the Civic Type R or Subaru with the WRX STI. Instead, the Hundai i30 N and Golf GTI may find themselves with company in the form of the Corolla GRMN.
at 5:30 AM