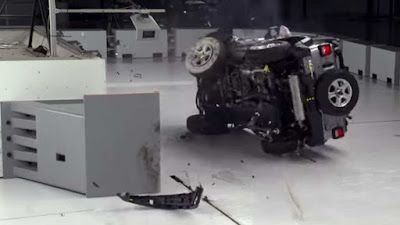 The 2020 Jeep Wrangler tipped over during its safety certification test. It happened during the Insurance Institute for Highway Safety (IIHS)’s driver-side small overlap front crash test and is clearly seen in the lead photo above (see video below). This results in the Wrangler earning a “marginal” rating for the test.

The Wrangler, which was redesigned in 2018, was evaluated three separate driver-side small overlap crash tests, one by Jeep as part of the Institute’s verification test program, and two at the Institute’s Vehicle Research Center. In both tests conducted by IIHS, the Wrangler rolled onto its passenger side after striking the test barrier.

The Wrangler performed well by the normal metrics used to evaluate performance in the driver-side small overlap test. The driver’s space was maintained well, and the dummy’s movement was well-controlled. However, the partial rollover presents an additional injury risk beyond what the standard criteria are intended to measure. A vehicle tipping onto its side is not an acceptable outcome for a frontal crash, and as a result, the Wrangler’s overall rating was downgraded to marginal.

Rollovers are especially dangerous crashes, in part due to the risk of complete or partial ejection. This is a particular concern in the Wrangler, which has a roof and doors that can be removed. The Wrangler also lacks side curtain airbags designed to deploy in a rollover to keep occupants inside. It is not required by regulation to have side curtain airbags because of its removable roof.

After the vehicle tipped over in the audit test, Jeep questioned whether this outcome was related to the method that IIHS engineers had used to attach the vehicle to the crash propulsion system. IIHS agreed to conduct a second test using a different method, which was approved by Jeep. The second test also ended with the vehicle tipping on its side.

The Wrangler earns good ratings in the moderate overlap front, side, roof and head restraint evaluations.

This is the second “black eye” for the Wrangler after the European New Car Assessment Program or Euro NCAP slapped it with a one-star safety rating. It did receive a four-star rating from the NHTSA.