McLaren Was Obsessed in Weight Reduction in Its Newest LT Model 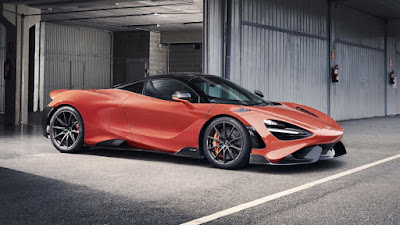 McLaren is opening a new chapter for their “Longtail” series with the introduction of the 765LT—a car so obsessed with losing weight, the carmaker’s engineers went through excessive lengths just for the grams.

Starting with the body itself, the McLaren 765LT uses carbon fiber extensively—everything from the front splitter, bumper, front floor, side skirts, rear bumper, rear wing, and diffuser is all made of the stuff. Hell, even the license plate holder is carbon fiber, too. The exhaust gets a full titanium makeover and deletes the finisher all for weight savings.

The same carbon fiber treatment continues inside with the seat shells and the interior lined with Alcantara. Then, the door pockets have been replaced with nets, the windows made thinner or made with polycarbonate altogether, the carpets removed on some areas, and even the air conditioning and audio system chucked out (these can be optioned back at no extra cost though).

All this obsession allowed McLaren to shave 80 kilograms (curb weight is 1,229 kilograms) over the 720S on which it’s based on.

Then, it gets McLaren’s 4.0-liter twin turbo V8. Using learnings from the McLaren Senna, power is at 765 horsepower and 800 Nm of torque. Together with its 7-speed dual clutch, the 765LT does 0-100 km/h in 2.7 seconds, while 200 km/h arrives in just 7.2 seconds. Power to weight ratio? 622 horsepower per ton—bettering its class rivals by more than 50 horsepower per ton.

Based on McLaren’s official info, here’s how much weight the 765LT lost (sans items that the carmaker didn’t disclose):
Moving on to the chassis, the 765LT has been tweaked for sharper handling and a more direct steering. The track is also wider and together with enhanced aero (up to 25 percent more downforce than the 720S), it lives up to the billing of one engaging supercar. The brakes have also been tweaked with Formula 1-inspired integrated caliper cooling and carbon ceramic disc brakes.