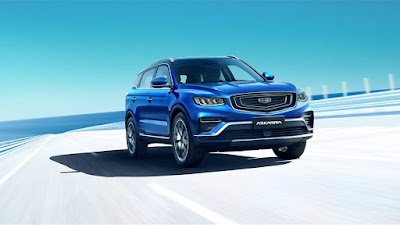 Two days after we reported that Geely Auto is launching an innovative in-car air filtration system, called the Intelligent Air Purification System (IAPS), Sojitz G Auto Philippines, the distributor of Geely in the Philippines has confirmed that its upcoming Azkarra compact SUV will come fitted with the new system.

With that, Sojitz G Auto Philippines says that its new Azkarra SUV launching in April, as well as 2020 Model Year Coolray sub-compact SUVs will be fitted with IAPS.

Focusing on the CN95 high-efficiency filter, it blocks at least 95 percent of particles and droplets measuring 0.3 microns in diameter—equivalent to wearing an N95 mask. And while viruses are much smaller (0.06 to 0.14 microns), because it’s carried by droplets, the filter can pretty much catch them.

In addition, the filter also has antibacterial properties—removing 95 percent of E.coli and 99 percent of staphylococcus aureus. It can also absorb smoky smells, odor, and even resist 90 percent of allergens including pollen and dust mites.

It’s worth noting that while Geely doesn’t 100 percent guarantee that its system will prevent a COVID-19 infection, at this point, the smallest of things add up.
at 2:22 PM