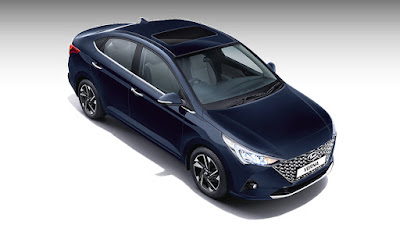 Hyundai has just released the first official photos of the refreshed Accent. Known as the Verna overseas, it will be making its global debut a few days after the launch of the all-new Elantra.

Since the Accent isn’t sold anymore in its home market of South Korea (the Venue has since taken its place), Hyundai has opted to launch it instead in India, an important market for the carmaker.

Based on the official photos released by Hyundai, the 2020 Accent receives an entirely new front end characterized by its angular headlights, larger and broader grille, and triangular fog lamp housing. At the corners, it has machine-cut two-tone alloy wheels, while at the back, it gets LED taillights along with a reshaped bumper. LED headlights will also be made available as an option.

So far, Hyundai hasn’t revealed how the Accent looks inside, but it does promise a lot of first-in-segment features including a digital gauge cluster, front ventilated seats, Qi wireless charger, rear USB charger, and a premium sound system by Arkamys.

For the Indian market, where the refreshed Accent will be sold first (and coincidentally, the source of Philippine units), it gets a choice between three engines—two gasoline and a diesel.

Transmission options are said to be manual and CVT for the normally aspirated 1.5-liter gasoline, while the diesel swaps the belt-driven CVT for a proper torque converter automatic. Meanwhile, the turbocharged gasoline engine is only available with a 7-speed dual clutch automatic.

More information on the refreshed 2020 Hyundai Accent will come out after its global debut.
at 11:33 AM