For P 3.57M, Volkswagen Lets You Convert the Samba Bus to an EV 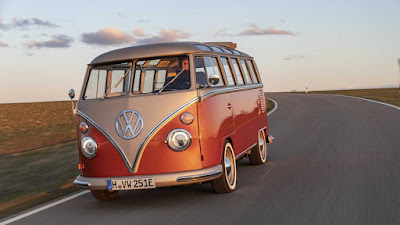 Volkswagen is now allowing owners of its classic T1 Samba Bus to convert it to run on a zero emissions elective motor.

Produced in cooperation with eClassics, the conversion will cost an eye-watering 64,900 Euros (~ P 3.574 million), but will swap its 44-horsepower boxer for something with twice the power and torque. In the engine compartment of the “e-Bulli,” as Volkswagen officially calls it, is a near-silent electric motor with 83 horsepower and 212 Nm of torque. With that, top speed is claimed at 130 km/h thanks to a one-speed gearbox.

The components are mostly shared with Volkswagen’s ID.3 all electric car, but the 45-kWh battery is customized especially for the e-Bulli and housed right at the center of the van. It has a range of about 200 kilometers.

With the new powertrain, Volkswagen has also opted to modernize the T1 Samba Bus’s running gear. Apart from a lower center of gravity thanks to the EV powertrain, it also gets new multi-link front and rear axles with adjustable shock absorbers and coil over struts, a rack-and-pinion steering system, and ventilated disc brakes all around.

Aesthetically, the converted T1 Samba Bus remains close to the original, but it does get modern niceties such as LED headlights and a push-button start/stop. Furthermore, the seating configuration’s been altered to accommodate the EV system, while managing to keep its classic vibe.

It also gets modern touches like a Bluetooth-enabled audio system (with subwoofers and all), new instrumentation, and even a smartphone-enabled vehicle app that shows the remaining charge time, current range, and more.

The launch of the e-Bulli marks the second classic Volkswagen to receive the EV treatment. The first was the iconic Beetle which was shown at the Frankfurt Auto Show last year.
at 1:43 PM