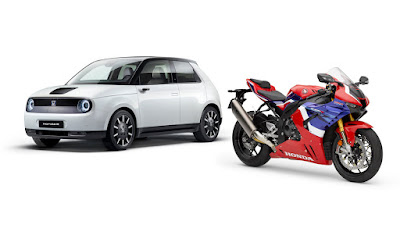 Honda’s gotten its design mojo back and proving it are three awards at the Red Dot awards including the highest honor—the Red Dot: Best of the Best.

Receiving the Red Dot 2020 for Smart Product Design as well as Red Dot 2020 Best of the Best Car Design is the first-ever Honda e—Honda’s first-ever full electric vehicle. Designed for urban environments, the Honda e was recognized for its signature front and rear LED lights and its glass charging port cover set in a unique black concave panel.

Before making its debut as a production vehicle, the Honda e was recognized as Best Concept Car in 2017 by the Car Design Awards.

Meanwhile, another Honda—this time its CBR1000RR-R Fireblade SP motorcycle also received recognition in the Smart Product Design category highlighting its “design without compromise” approach. In particular, the jurors recognized its best-in-class drag co-efficient thanks to learnings from the MotoGP.

The CBR1000RR-R Fireblade SP was designed with an innovative new approach in which Honda R&D’s digital simulation experts, clay modelers, and styling sketch designers worked with a continuous, almost simultaneous feedback loop to create the maximum effect in the shortest possible development time.

The annual Red Dot awards honor excellence across product, brand, and communication design from international businesses. The winning products are decided by a judging panel comprised of 40 international experts who test, evaluate, and discuss each entry.

Honda has a long history of success in the automotive section of the Red Dot awards, among the most prestigious and sought-after awards in the world. Other recent successes include the Honda S2000 in 2001 and Civic in 2006 for “Red Dot: Best of the Best,” and European Accord Tourer in 2008 and Insight in 2009 for “Red Dot”.
at 10:12 AM