Social Distancing, Germaphobia is the New Norm at Geely's Plants 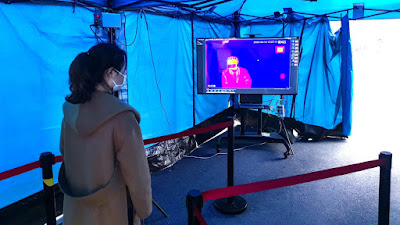 Life in China is slowly getting back to normal after being the first country to get hit by COVID-19. As they report fewer cases, no one is taking any chances this time around. Cleanliness that borders on mysophobia (also known as germaphobia) and social distancing are now the norm. Just take a look at how Geely is handling the situation.

When the Chinese government opted to extend its lunar new year holiday to curb the spread of COVID-19, Geely followed to protect its 60,000 China-based employees. The Chinese automaker then opted to have their workers return in three phases, and by the first week of March, all workers are back at it again—designing, developing, and producing automobiles once more.

Having said that, security and medical measures have been put in place to ensure that the contagion remains outside their headquarters. The measures border on the extreme—rivaling almost that of a top-secret installation, but for Geely and its workers, this is the new normal.

All employees entering the Geely headquarters must first undergo temperature testing. If anyone has a fever, he or she is immediately sent to isolation, and the medical teams alerted. To ease congestion within the main buildings, clock in and clock out machines have been moved to the exterior of the building for the short term, allowing employees to move in and out of the building with relative speed and convenience.

Hand sanitizers have also been placed at the entrance and at all major traffic points, making it easy and convenient to continually wash hands during the day. Initially, the use of elevators was restricted. Since then, Geely has opted to limit the number of occupants, and also introduced sanitizers for those pressing the buttons.

Once inside, all employees are given new face masks every 8 hours, and are encouraged to keep their mouth and nose covered at all times. Supervisors are also required to conduct temperature checks on employees twice a day. Large meetings have been cancelled, and video or teleconferencing has replaced face to face communications.

Even lunch breaks have come under scrutiny: employees must maintain a 1-meter distance when using the microwave or other facilities.

These strict protocols have been rolled out at all of Geely’s facilites across China. With these measures, Geely has returned to full production with no cases of the coronavirus.

Aside from getting back to work, the carmaker has been dedicated to supporting the prevention of COVID-19. These measures include the development of their Intelligent Air Purification System that can remove harmful elements including bacteria and viruses from within their vehicles. The system will make its Philippine debut in the Azkarra.
at 10:32 AM