This Famous Shelby GT350R May Fetch More Than P 153 Million 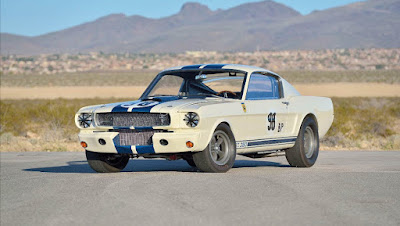 For those who watched Ford v Ferrari, they’ll remember that Christian Bale played racer Ken Miles. Well, Shelby and Mustang enthusiasts will now get a chance to own a piece of history as a real Mustang driven by Ken Miles will be up for auction this May.

The white with blue stripes 1965 Shelby GT350R Competition Model packs a 4.73-liter V8 making 306 horsepower. But more than just a classic muscle car, this particular Mustang is known as the “Flying Mustang,” because of a memorable photo showing it with all four tires off the ground. It’s this exact car, driven by Miles, that won at the Green Valley Raceway in February 1965 that’s going under the hammer.

The first competition Shelby Mustang, the first to be raced, and the first to win, this Shelby GT350R is known as the 5R002. It simultaneously served as Shelby American’s factory engineering mule, a rolling test bed for ideas and components, including those that would constitute both the second team car (5R001) and all 34 customer R-models that followed.

This makes the 5R002 historically significant, and even more so because it’s intertwined not just with the Shelby name, but also because of Ken Miles—revered as one of the greatest figures in motorsports, and one who tragically died at the height of his career.