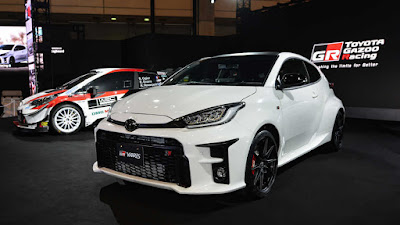 After unveiling it at the 2020 Tokyo Auto Salon, Toyota has finally priced its GR Yaris, at least for the European market. And get this: it’ll undercut both the Volkswagen Golf GTI and the Honda Civic Type R.

Built by Gazoo Racing, the GR Yaris is a homologation model built for Toyota to compete in the WRC.

Developed with the help of Tommi Mäkinen Racing, the GR Yaris stuffs a turbocharged 1.6-liter 3-cylinder engine making 272 horsepower into the diminutive Yaris frame. Combined with a 6-speed Intelligent Manual Transmission (iMT), it reaches the 100 km/h in less than 5.5 seconds.

Built to be lightweight and highly maneuverable, the GR Yaris fits a newly-developed all-wheel drive system which Toyota calls the GR-FOUR. It uses a multi-plate clutch to transfer the power of the new engine to all four wheels with minimal loss.

During its launch in Japan, Toyota revealed its pricing for the domestic market there: 3.96 million yen or P 1.831 million. Now, as it makes its way across the pond to Europe from Toyota’s Motomachi, Japan plant where the GR Yaris is made, it’s priced at 33,200 Euros or P 1.894 million. Not a big jump, actually.

This is pretty significant because it undercuts both the Volkswagen Golf GTI and the Honda Civic Type R. Not bad for a model that’s likely limited to just 25,000 examples over a 12-month period.

Please Toyota Motor Philippines, if you’re reading this, we certainly hope you’ll bring in the GR Yaris in here as well. Given you’ve spent a lot on marketing the Gazoo Racing branding on the GR Supra and the Vios Racing Festival, bringing in a product like the GR Yaris would certainly fit in your product line-up nicely.
at 9:49 AM