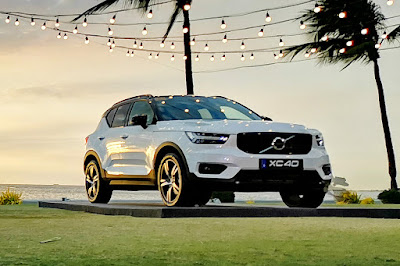 After being made available in selected numbers (and only one variant) since last November, Volvo Cars Philippines has announced its full-on onslaught of the small premium SUV with the official launch of the first-ever XC40 for the Philippine market. With 3 available variants and 6 colors, Volvo aims to capture a 30 percent market share in the small premium SUV market with the XC40 this 2019.

Developed around the challenges of modern city life, the XC40 aims to make the daily urban commute less stressful and more enjoyable, as drivers in the segment can now rely on the award-winning safety, connectivity and infotainment technologies known from Volvo’s acclaimed new 90- and 60 Series SUVs.

The XC40 rides of Volvo’s new Compact Modular Architecture or CMA and includes a range of groundbreaking technologies first introduced in its 90- and 60 Series siblings based on Volvo’s larger Scalable Product Architecture (SPA).

Volvo’s approach to safety and user experience builds on a philosophy it calls the Circle of Life: a constant improvement of standards and technologies, based on consumer insights and real-life data.

Safety and driver assistance features offered on the XC40 include Run-off Road protection and mitigation, Cross Traffic alert with auto brake, and the 360-degree Camera that help drivers maneuver their car into tight parking spaces. These and other technologies make the XC40 one of the best-equipped premium SUVs.

While the starting point for each new Volvo is the most advanced safety and driver assistance systems, the, Volvo’s first-ever small premium SUV also benefits from high levels of technology seen in its 90- and 60-series models. For instance, it comes with Volvo’s SENSUS infotainment system which is centered around a portrait-oriented touchscreen.

For the Philippine market, Volvo Cars Philippines is making the first-ever XC40 available with one of two engines.