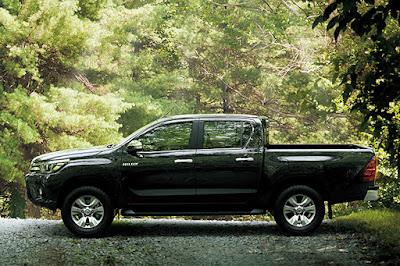 Is Toyota Motor Philippines updating its Hilux pickup truck? That seems to be the case if this post from the soon-to-be-opened Toyota Valenzuela is to be believed.

Launched in 2015, the current-generation Hilux sure is getting old, and is likely the first candidate among the second-generation IMV models to receive a midcycle facelift. Though Toyota has kept most of the details under wraps, Toyota Valenzuela posted a photo detailing some of the changes.

The post which is screen-capped below (in case it’s taken down) shows some minor tweaks to the Hilux’s design. While it was largely suspected that the squarish Conquest variant’s front-end would make it to lower-end models, that doesn’t look to be the case. 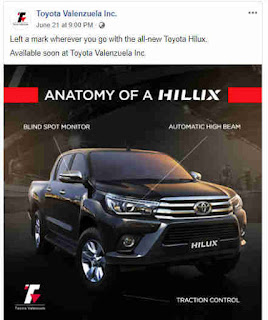 Instead, it stays true to the Hilux’s current form except that it gets new projector-style headlights. This likely signifies a move to LED lighting elements for the headlights and the addition of daytime running lights as well—things already standard on the Conquest model.

The rest of the package looks unchanged except for the addition of new safety features such Automatic High Beam and Blind Spot Monitoring. These are great additions to the current model’s 7 airbag system, ABS with EBD, and Vehicle Stability Control (at least on high trim models).

With Toyota Valenzuela officially opening next week, the launch of the refreshed Hilux shouldn’t be that far behind. Now, as for the price given Toyota Motor Philippines’s recent playbook, its highly likely that pricing will remain the same for the upgraded model. As a refresher, the top-of-the-line Hilux 2.8 G is pegged at P 1,496,000 for the M/T and P 1,626,000 for the A/T.
at 1:14 PM