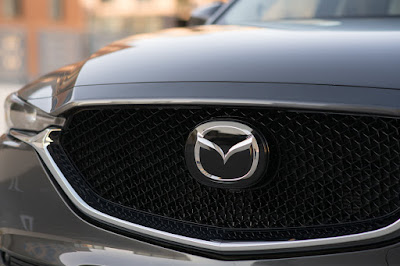 Mazda Philippines scores highest in the J.D. Power 2019 Philippines Customer Service Index Study besting 10 other brands. The Japanese carmaker scored 824 out of 1,000 points. Nissan landed in second at 814 while Hyundai finished third at 811.

The study measures overall satisfaction among vehicle owners who visited an authorized service center for maintenance or repair work during the first 12 to 36 months of ownership based on five factors (in order of importance): service quality (28 percent); service initiation (20 percent); service facility (20 percent); vehicle pick-up (17 percent); and service advisor (16 percent).

Unfortunately, overall customer satisfaction among vehicle owners in the Philippines still decreased with the Industry Average dropping to 803 points in 2019 compared to 812 in 2018.

The study finds that customer wait times have increased compared with 2018. More than one-third (35 percent) of customers experience wait times of more than 30 minutes to handover their vehicle for service, an increase of 11 percentage points from 2018. Satisfaction among these customers is lower than those who experienced a shorter hand-over time (787 vs. 812, respectively).

“This situation is not new to the industry, the time spent by customers to drop off a vehicle for service is a key contributor towards their overall satisfaction,” said Sigfred M. Doloroso, Country Manager for the Philippines, J.D. Power. “However, this is an issue that can be mitigated through the efficient use of a proper appointment system. Dealers need to actively encourage the scheduling of appointments and ensure they consistently deliver not only a more personalized service to after-sales customers but also a faster turnaround from drop-off to pick-up.”

Findings from the study also show that the service process is slower, with 69 percent customers indicating that service took three hours or more to finish, an increase of 11 percentage points from 2018. Furthermore, 72 percent of customers indicate that paperwork completion took more than 10 minutes during the vehicle pick-up. Customers who spent more than 10 minutes doing paperwork are less satisfied than those who experienced a faster paperwork process (793 vs. 831, respectively).

Following are additional key findings of the 2019 study: 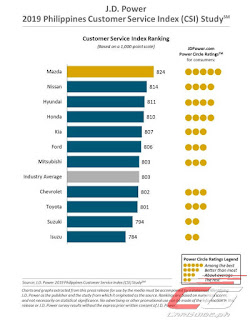